Situated in the Alpine region of Haute-Savoie, Flaine is the largest of the five French resorts that belong to the Grand Massif - one of the largest ski areas in the world, boasting an impressive 265km of perfectly groomed piste.

Flaine is divided into two main areas - Flaine Forum and Flaine Forêt, each of which have its own pistes and lift. The village resort sits in a wooded valley 30 minutes uphill of Les Carroz from where you can access the slopes, but given Flaine is a car-free zone, the ski area is ski-in-ski-out.

The village of Flaine was built in the 1960s so is, unfortunately, a series of gloomy concrete tower blocks. Due to frequent heavy snowfall, much of the surrounding scenery is covered in fine white powder so there is not much in the way of natural beauty other than the mountain range itself.

Despite not being the most attractive destination however, Flaine’s reputation as a skiing Mecca is not lost on visitors that come here for adrenaline-fuelled fun. The Grand Massif remains the most visited ski resort in Europe and Flaine boasts a wealth of runs for skiers at all levels. 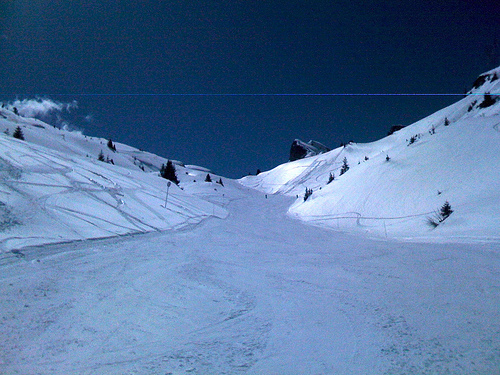 Flaine is part of the Grand Massif ski area and there is no shortage of options in the region. One ski pass gives you access to all areas.

Flaine Forum is the first of the two main ski areas in Flaine. From here you can go up to the north facing bowl by either of the gondolas or a speedy chair lift.

Intermediate-Advanced: Flaine Forum is predominantly a network of red runs and a smattering of blues so is well suited to intermediates. Advanced skiers should head to Styx and Diamant Noir to navigate challenging moguls.

Beginners: Flaine is perfect for beginners. There are two dedicated nursery slopes together with four beginners slopes which are served by free lifts - so beginners don’t have to pay for the first couple of days. Once you do hit the slopes there’s a couple of greens and a gentle blue for you to advance your snowplough technique.

The other ski area is Flaine Forêt which connect to the neighbouring slopes of Samoens, Morillon, and Les Carroz via the Grand Vans chairlift and the Tête des Saix.

Intermediate-Advanced: The pistes on Flaine Forêt are mostly red and blue. To claim your piece of history, head for the 14km blue “Cascades” from the summit of the Grandes Platieres to the foot of the Sixt Fer a Cheval - it’s one of the longest pistes in the world.

Beginners: An interesting run for beginners is the green Marvel run which has signposts dotted along the route describing the local wildlife.

The north-facing Gers bowl is shaded so offers some of the best snow conditions in Flaine, However, the off-piste sections can be dangerous. It is strongly advised that you do not stray from the groomed slopes in this area.

Intermediate-Advanced: In the valley to the right of the Gers drag lift is a tricky blue that is ideal for intermediates to get into the swing of things. Running alongside the drag lift is a steep black run. The La Combe to Gers run is also worth checking out.

Beginners: Gers Bowl is not suitable for beginners.

For a change of scenery, head for the majestic Mont Blanc Massif via the Tetes des Verds and Desert Blanc chairlifts. You can also get there from Grandes Platieres but you will experience longer queues there.

Intermediate-Advanced: Just off the blue Serpentine via left for a couple of exciting high-speed red runs. First, you will join Faust which takes you back to the Grande Platieres gondola or veer left again down Almandine.

Beginners: The forgiving Serpentine blue run is a great run for confident beginners.

Given the Grand Massif is one of the World’s biggest and most popular ski resort, it’s no surprise that the ski passes are among the most expensive. However, one pass gives you access to 143 pistes over a 265km ski-able area.

Beginners ski lift pass - This works on a point card system and is valid is specified lifts. Different lifts use up different points and you can reload with a minimum of 20 points for €22.

The prices above are given by the Flaine Tourist Office.

Considering its size and popularity, it’s surprising that Flaine only has two ski schools; Ecole du Ski Francais, and the less pretentious Ecole de Ski International. However, there are plenty of private ski instructors plying their trade in Flaine which provide dedicated service.

There are plenty of shops renting ski and snowboard equipment in Flaine. Most of the stores are recognised International ski and snow hiking specialists including Intersport, Sport 2000, and SkiSet.

Flaine is geared towards families. You will find plenty of family-friendly accommodation and restaurants, and the ski schools offer childcare facilities. Although there is no snow park per se, there is a family fun area that is predominantly designed for kids to sharpen the skiing skills over bumps, banks and trees.

Other than skiing, there are plenty of other activities to keep the kids entertained. In Flaine Forum there is an ice-skating rink, whilst in Flaine Forêt is an indoor climbing wall and Galaxy Bowling complex that also has games rooms, pool tables and live sports broadcasts. Most apartments blocks in Flaine have a resident pool and leisure facilities.

Flaine and the Grand Massif is typically open from early December to late April. Thanks to heavy snowfall, you are guaranteed fresh powder throughout the ski season. The best time to go, however, is January as the number of visitors drops off so the queues are practically non-existent.

Flaine is probably the most snow-sure resort in the Haute-Savoie region, and because the majority of runs are in the shade, the fresh quality stays better for longer. In high altitudes, the wind is felt more readily, especially on the chairlifts. However, the resort does receive a fair amount of sunshine throughout the season so you won't freeze as the day wears on.

​Flaine and the Grand Massif is typically open from early December to late April. Thanks to heavy snowfall, you are guaranteed fresh powder throughout the ski season. The best time to go, however, is January as the number of visitors drops off so the queues are practically non-existent. The lifts open at 08.30 and close at 16.30.

British Airways and Air France offer flights for a very reasonable rate from London Gatwick to Lyon or Geneva. Budget airlines including EasyJet, KLM and Eurowings are around the same price from London but two, three or even four times the cost from other major airports throughout the UK.

Flaine is best reached from Geneva airport. Transfers by road take approximately 90 minutes. Another option is to take a connecting flight from Geneva to Les Carroz a 60-minute drive from the resort. Chambery and Lyon airports are also an option.