Travellers may be asked for credit card instead of EHIC card, warns EU Commission

Get your quote now
Home > Blog > Travellers may be asked for credit card instead of EHIC card, warns EU Commission
Some Columbus Direct customers have experienced issues using EHIC cards in Spain

London 31 May 2013 – A year ago this month, Columbus Direct warned British travellers that the European Health Insurance Card (EHIC) card may not be enough to cover their medical expenses if they fall ill in countries such as Greece and Spain.

At the time, this was due to some state hospitals reporting medical supply shortages caused by the austere economic climate. The EU commission has announced it is investigating growing complaints that Spanish hospitals, specifically in tourist areas, are turning away the EHIC and asking for travel insurance details and a credit card. If British tourists cannot be treated in local hospitals, they may be directed to visit a private clinic and potentially face medical bills exceeding thousands of pounds.

The EHIC can be used in the 27 EU countries as well as Liechtenstein, Iceland, Norway and Switzerland and entitles you to the same state healthcare as a citizen in that country, including prescriptions, treatment costs and hospital stays. 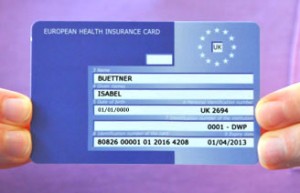 The EHIC can be used in the 27 EU countries.

Greg Lawson, Head of Retail at Columbus Direct said: “A number of Columbus customers have experienced issues trying to use their EHIC card in Spain and other EU countries, although our emergency assistance team have then stepped in to manage the situation. Where we cannot recover these costs via the Department of Work and Pensions, these increased costs will then unfortunately be passed to consumers in increased premiums.

Travellers have long been confused over the EHIC, with travel insurance companies emphasising that private healthcare and flights home are not covered under the agreement. However, that is a different risk to a country’s medical institutions electing to ignore the obligations imposed upon them as members of the EU. There may well be countries that rely on private clinics, especially in tourist resorts, to provide some of the medical treatment to overseas visitors but actively redirecting travellers in distress away from state hospitals, or unjustifiably demanding payment in advance, cannot be condoned.”

Lawson continues: “The UK travel insurance industry has been lobbying the UK and Spanish governments on this matter for years and the EU first raised their concerns with Spain in 2010. Whilst many travel insurance policies specifically exclude the costs of private treatment, the intention was to deter travellers from making that decision themselves, not for circumstances where they have no choice.

Ironically, if this proves to be the case, the Spanish hospitals may actually cause more harm than help to their own economy and people. If travel insurance is wrongly used as a substitute for the EHIC, the cost of all travel insurance to that country will rise and this may deter travellers in the long run. In recent months, some travel insurers have increased premiums for specific EU countries, including Spain, Greece and Cyprus.”

Lawson concludes: “Columbus have always supported the Foreign Office in their recommendation that, as well as an EHIC for travel in Europe, travellers take out appropriate insurance whenever they travel overseas.”

← Skiing for beginners: What to expect from your first winter sports holiday

Should you Leave Your Gadgets at Home When Travelling? →