Wedged between Courchevel and Meribel, La Tania offers some of the best skiing in the world. The resort is an offshoot of the purpose-built village used to accommodate the global media population that descended during the 1992 Albertville Winter Olympics.

Favoured by British and Dutch skiers, La Tania is the smallest of the main resorts in the Three Valleys ski area. Geared towards family skiing holidays, and mixed-ability groups, there are easy and challenging slopes for beginners, intermediates and advanced skiers, with both narrow and wide runs weaving through tree-lined slopes.

The ski area boasts 150km of pisted runs which provide access to the two other resorts in the Three Valleys region - inviting you to explore a total of 600km of ski slopes serviced by 200 ski lifts.

La Tania’s natural beauty is well-preserved thanks to the car-free town centre. Although the apres-ski scene is not as raucous as more upmarket ski resorts in the French Alps, there are a handful of party bars and a good selection of pubs and restaurants with varied menus.

With affordable ski passes and budget-airlines flying from the UK, La Tania represents a good choice for budget skiers. 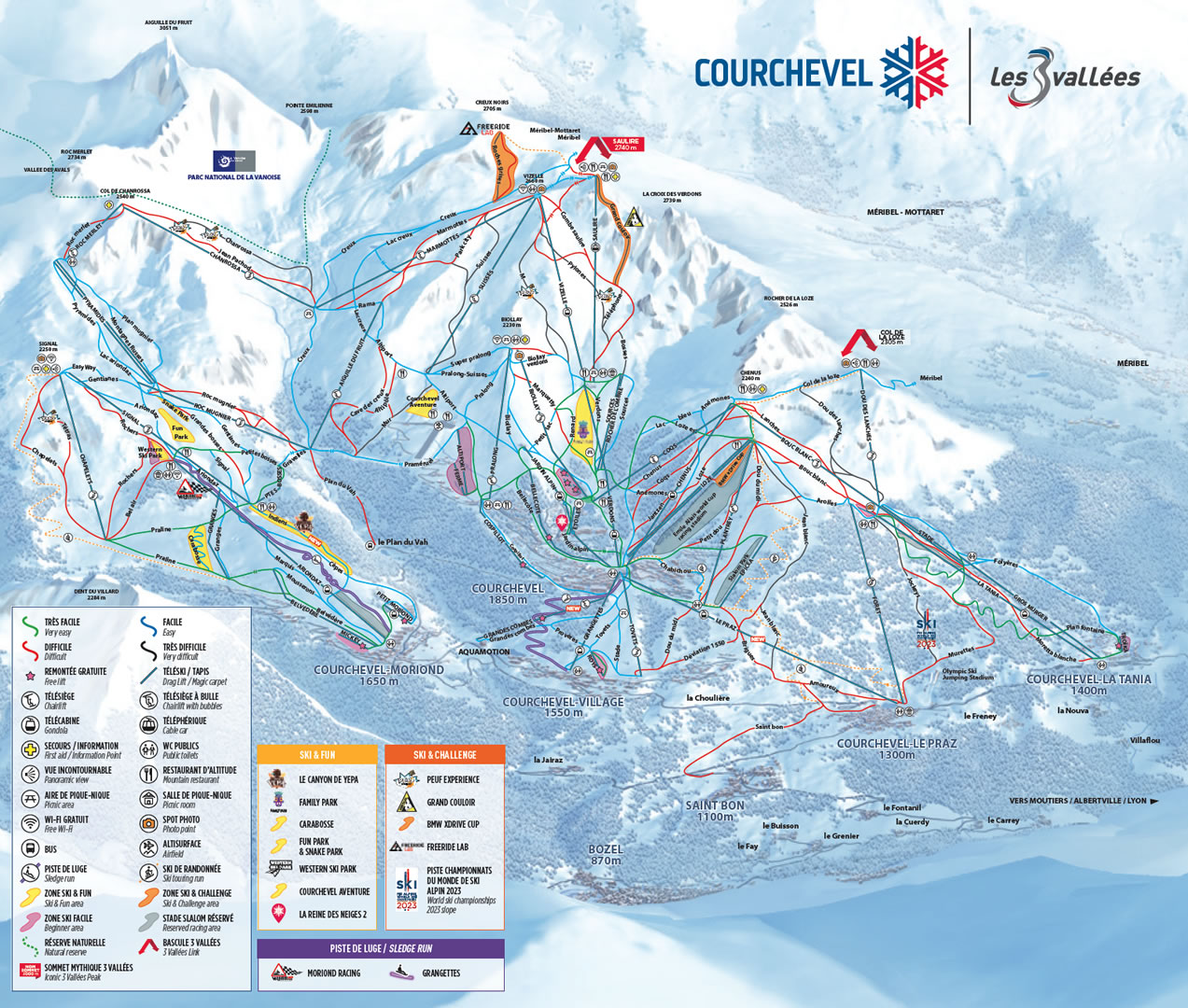 Col de la Loze is the highest point of La Tania ski area and is reached via the Dou des Lanches chair lift. The ski area acts as a key link connecting La Tania to Courchevel and Meribel Valleys.

Beginners: Easy pistes with wide boundaries through the trees are ideal for helping to build confidence and improve the ability of beginners.

The summit at La Saulire is the highest point of the Courchevel-La Tania Valley and provides visitors with panoramic views of Mont Blanc and La Grande Casse.

Intermediate-Advanced: Advanced skiers will be in their element tackling the most challenging runs of the Three Valleys ski area including the legendary La Combe de la Saulire which can be super-fast.

Beginners: You will find a blue run across the main near the Saulire cable car. Beginners are not advised to take the cable car to the summit, but you can go to the top and back down again in the cable car.

Courchevel is an intermediates paradise although there are runs for skiers and snowboarders of all abilities. You can also take a lift over to Val Thorens, Les Menuires and St. Martin de Belleville from here.

Intermediate-Advanced: There are plenty of blue and red runs connecting Courchevel Valley with La Tania. Advanced skiers will enjoy the Dou de Lanches run which connects to Jockey black run and takes you down to the Courchevel bowl. You will also find freeriding through the trees from Blue Folyeres and Moretta Blanche.

Beginners: An easy green connects Courchevel with La Tania and there is another beginners slope in the valley.

Meribel is located in the heart of the Three Valleys ski area and boasts incredible views looking over the treetops across the mountainscape.

Beginners: If you’re heading to Meribel, take the blue run from La Tania to Boulevarde de la Loze. You will also find several other green and blue runs towards the bottom slopes and a terrific blue run from the peak of Val Thoren.

La Tania is the most modern of the three resorts in the Trois Vallees area and offers affordable skiing, accommodation and plenty of well-groomed slopes to explore.

Since opening in 1992, the resort has become a highly popular destination for family skiing holidays and is starting to attract crowds of all ages. The apres-ski scene is not as raucous as many other European ski resorts although there are plenty of atmospheric bars serving cocktails, ales and hosting live music.

Local area lift passes are available for each resort, or you can purchase a full area ski-pass which gives you access to all three resorts in the Three Valleys ski area.

Prices can vary depending on when you go, and passes are cheaper for seniors and children who are 13 years-old or younger.

A La Tania mini-pass can be bough for the La Tania gondola, while you can get a 3 Valleys pass if you plan to ski in other areas within the resort.

Given La Tania is a popular ski holiday for families, there are plenty of ski schools that cater to kids and daycare facilities for young children. Try the Oxygene, Ski Progression, New Generation or Magic ski schools.

As a ski resort, La Tania is ideal for UK families visiting with young children. The Family Park at the heart of Courchevel ski area is littered with magical trails, tables and jumps, the Inuit Piste has a lot of outdoor games, activities for 5-12-year-olds and the Yeti Park is a magical kingdom for toddlers.

Family Friendly Ski offers free afternoon childcare over the Christmas week and will collect your child from ski schools. There are also several other creches that cost around six euros an hour, several of which are within easy reaching distance of the lift station. If you’re planning to go self-catering, there is a deli, bakery and a supermarket in the town centre.

Mid-season is the best time to visit for fresh snow, but with snow-making machines servicing 67km/41.6m of ski area, good ski conditions are available all season.

La Tania receives snowfall intermittently and mostly receives sunny days. The weather usually drops in the minus zone at the top of the mountain (1-6 degrees), +1 to -2 mid-mid-mountain and 2 to 6 degree at the bottom.

Check out the latest snow reports and webcams a couple of days before heading out to La Tania. February and March can receive fresh snowfalls of up to 8-16cm.

The nearest airports to La Tania are Chambery and Grenoble a little over one hours drive, although most flights from the UK fly to Geneva, which has a two-hour transfer by road. Other airports Annecy (2hrs), Lyon (2.5hrs), Sion (3hrs) and Turin Caselle (3hrs).

The closest airports are Chambery and Grenoble both of which are a mere one-hour transfer by road. You can also reach La Tania from the airports by train via Moutiers.

From the airport, you can take the train to Moutiers and a 30-minute bus transfer from the train station.

If you intend to hire a car, take the A43N to Albertville and the N90 to Moutiers and follow the directions for Courchevel.