Floods in Peru, Chile and Bolivia after heavy rain

Get your quote now
Home > Blog > Floods in Peru, Chile and Bolivia after heavy rain 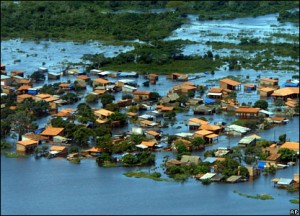 Torrential rain trapped many cars and flooded hundreds of homes

Torrential rain has been causing havoc along the Pacific coast side of South America, with flooding causing the deaths of at least six people in Peru.

In the southern city of Arequipa, thousands of people were left without electricity and drinking water.

The Aguas Andinas water company said it expected to bring the water supply back to normal by Sunday afternoon.

Last week, even Chile's Atacama desert, one of the driest places in the world, suffered with heavy rain.

In Peru, thousands of people have been left without electricity and drinking water

The authorities in Peru declared a state of emergency in Arequipa.

The national meteorological service said that the bad weather brought down the equivalent of three months of rain in about seven hours.

"There are no records of an event of this magnitude", the local director of the service, Sebastian Zuniga, told the Andina news agency.

At least two bodies were found in a car that was buried in mud after a road collapsed.

Torrential rain has also fallen over most regions in neighbouring Bolivia.

Nearly 9,000 people are said to have been affected and crops lost to the rain.

Last week, Brazil announced it would send 500 tonnes of rice to aid Bolivians hit by the natural disaster.

Columbus Direct customers who have purchased their policies after 10 February 2013, 01:57 GMT will not be covered under the policy for Travel Delay/Abandonment and Missed Departure.

See below our guidance regarding the Travel Delay/Abandonment and Missed Departure sections of the policy further to the disruptions that might affect South America.

← US north-east braces for historic snowstorm

Don't pack away those thermals just yet →