Get a better deal for your Summer Holiday

If you’re like us and looking forward to your summer holiday already this year, it’s a good time to start planning if you want to get a good deal. A recent study* by ABTA (Association of British Travel Agents) suggests that  a third of us (34%) booked their holiday further in advance in 2012 compared to the previous year , and when asked, 68% said that this was because they were concerned about leaving it too late to get the best prices. 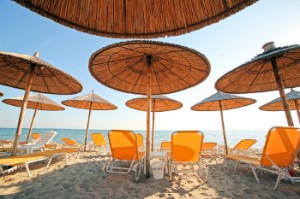 Despite years of being told by budget airlines and hotel booking websites that DIY holidays are the cheapest way to travel, it also seems that nearly half of British travellers are still plumping for packages to make the best of special offers – 48% of us in 2012, a year which also saw a slight dent in the number of DIY holiday bookings with ABTA’s survey citing just 39% of people having said they’d paid for a DIY holiday compared to 43% the previous year.

In particular, all inclusive holidays have been through somewhat of a renaissance during the past twelve months, as families look to more carefully budget the amount they spend while they are away by paying for meals and drinks in advance. All inclusive providers are surfing this wave of success and it’s expected that there will be an even more extensive range of competitive deals out there for the forthcoming season.  So the best advice if you’re after a week in the sun is – book early and go all-inclusive.

And if you’re looking for an undiscovered destination to glean even more of a bargain, take a look here.

← Great holiday ideas to get away from it all