Hurricane Barbara that, formed over the Pacific Ocean, has been lashing parts of Mexico's Pacific coast after making landfall in the town of Santo Domingo Zanatapec, in Oaxaca state.

Two people have been killed in the state, the authorities say - an American surfer and a young Mexican swept away by flood waters. Fourteen fishermen were also reported missing at sea. 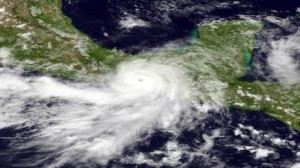 Hurricane Barbara has been lashing parts of Mexico's Pacific coast

A warning was issued for the stretch of coast between Puerto Angel and Barra de Tonala.

Thousands of people in Chiapas and Oaxaca states have been evacuated. Roads have been closed and sea traffic suspended in the area.

The storm that preceded the hurricane caused floods in many coastal areas, including the resort city of Acapulco, further north. The hurricane is expected to dissipate in the next 24 hours.

Columbus Direct customers who have purchased their policies after 30 May 2013, 04:18 GMT will not be covered under the policy for Travel Delay, Abandonment, or Missed Departure as a direct or indirect result of the hurricane.

Skiing for beginners: What to expect from your first winter sports holiday →