At least 91 people, including 20 children, are feared killed by a huge tornado which tore through Oklahoma City suburbs, officials in the US state say.

Worst hit was Moore, south of the city, where neighbourhoods were flattened and schools destroyed by winds of up to 200mph (320km/h). About 120 people are being treated in hospitals.

President Barack Obama has declared a major disaster in Oklahoma. 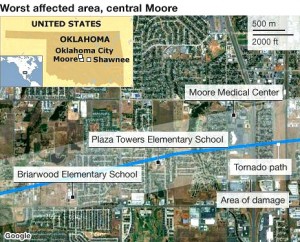 Hours after the storm struck, the frantic search-and-rescue operation is still going on. Heavy machinery is being used under floodlights to try and find and free those still trapped under the tons of debris.

The town of Moore was hit by a record breaking storm once before - 14 years ago - when a deadly tornado took a similar path. More people are already known to have been killed this time around.

Hospitals have been treating the scores of injured - many are still critically ill and the authorities warn that the number of dead is likely to increase. He also ordered federal authorities to join in the search efforts which are continuing throughout the night.

Monday's twister hit Moore, a suburb of about 55,000 people, at 14:56 (19:56 GMT) and remained on the ground for about 45 minutes. The official death toll is 51, but local authorities say the figure is expected to rise as another 40 bodies have been found.

The Oklahoma chief medical examiner's office said at least 20 children were among the dead. Plaza Towers Elementary school took a direct hit: the storm tore off the building's roof and knocked down walls.

"The school was flattened. The walls were pancaked in," Oklahoma's Lt Gov Todd Lamb told the BBC.

"There's still roughly two dozen children that are missing. There have been some bodies recovered from that school and it's absolutely horrific and devastating."

Another school - Briarwood Elementary - was also damaged, and teachers were later seen leading pupils out to safety.

Oklahoma Gov Mary Fallin said it was a "tragic" day.

More than 200 Oklahoma National Guardsmen as well as out-of-state personnel have been called in to assist the search-and-rescue effort.

The BBC's Alastair Leithead in Oklahoma says many tornadoes in the region hit the open plain, but this one struck a residential area. Many houses are built on hard ground without basements, so many people did not have recourse to shelter, our correspondent adds.

"We locked the cellar door once we saw it coming, it got louder and next thing you know is you see the latch coming undone," survivor Ricky Stover said.

"We couldn't reach for it and it ripped open the door and just glass and debris started slamming on us and we thought we were dead, to be honest."

The damage wrought by the tornado was "unlike anything that I've ever seen before," said Rick Smith of the National Weather Service

Melissa Newton said: "There's shingles and pieces of sheet rock and wood in our yard and all across our neighbourhood. Some homes are completely gone. It's devastating."

James Rushing said he had hurried to Plaza Towers Elementary School, where his foster son Aiden was a pupil, to see it destroyed by the storm.

"About two minutes after I got there, the school started coming apart," he told the Associated Press news agency.

The National Weather Service (NWS) said Monday's tornado had generated winds of up to 200mph.

"It's certainly the most powerful tornado that I've ever dealt with in my 20 years with the weather service," NWS meteorologist Rick Smith in Norman, Oklahoma, told the BBC.

The town of Moore was hit by a severe tornado in May 1999, which had the highest winds ever recorded on Earth.

But Betsy Randolph of the Oklahoma Highway Patrol told local news station Skynews 9 that the damage on Monday appeared to exceed that of the 1999 tornado.

Tornadoes, hail and high winds also hit Iowa and Kansas, part of a storm system stretching from Texas to Minnesota.

On Sunday, a tornado smashed a trailer park on Highway 102 near Shawnee, Oklahoma.

Oklahoma's state medical examiner confirmed earlier on Monday that two people had been killed in the area.

Columbus Direct customers who have purchased their policies after 21 May 2013, 07:08 GMT  will not be covered under the policy for Travel Delay, Abandonment, or Missed Departure as a direct or indirect result of the bad weather.

← Disneyland: Why you're never too old