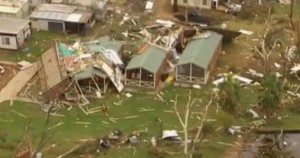 One resident of a caravan park in Mulwala, New South Wales said, "This is just like we're in war. Everyone's lost everything!"

Another woman described witnessing, "bits of timber and trees and pieces of caravan" flying past.

In the state of Victoria, around 20 people were injured and had to be airlifted to a local hospital.

Columbus Direct customers who have purchased their policies after 22 March 2013, 10:25 GMT will not be covered under the policy for Travel Delay, Abandonment, or Missed Departure as a direct or indirect result of the bad weather.