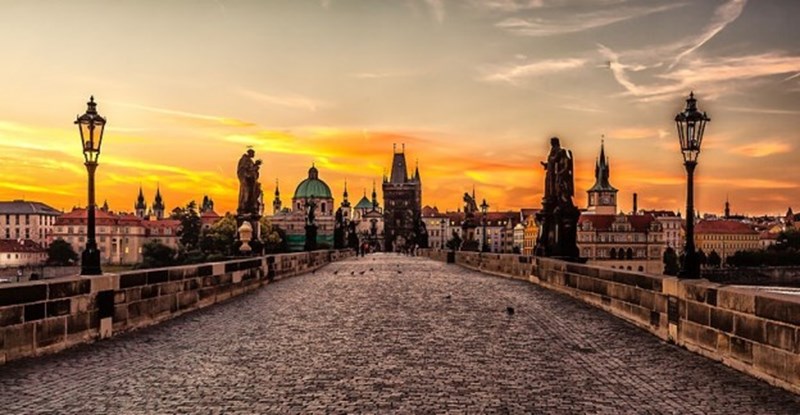 Fed up with spending Easter gorging yourself on chocolate, watching the same old films trotted out every year? Of course you are.

Why not make the most of this year's four-day weekend by packing a bag and jumping on a flight to somewhere new? You don't need a travelling companion; just book a bed, your plane ticket and see where the wind takes you. Here's our pick of the top three places to visit this Easter break.

Rich in history (it's the birthplace of Aphrodite, don't you know) and warm, sandy beaches, Paphos is the ideal destination for single travellers. You can fly into Paphos International Airport from many spots in the UK, such as London and Edinburgh, or, you can land at Larnaca Airport, though this is 90 minutes away from Paphos itself. A 10-mile bus journey will take you into the city centre, where a wide variety of quaint B&Bs await, like the Perrgell Bed & Breakfast and the Metamorphis Guest House. Each offer comfortable accommodation and a true taste of Cypriot life.

There's no shortage of things to see and do in Paphos, so it all depends on your intentions. Fancy relaxing to the sound of the waves and under the warmth of the sun? Take a towel, a good book and head to the Cape Drepanon coastline, or the beach west of Paphos town.

Fontana Amorosa beach is fairly secluded; surrounded by clear waters and rocks, it's the perfect personal haven. If you'd rather delve into the area's history, trips to the Tombs of the Kings and Paphos Archaeological Park are crucial.

Alternatively, a horse ride through the Paphos Forest is a great way to spend an afternoon. Led by experienced riders, you'll take in glorious views of Pano Panayia, Cyprus' mountainous village. Later, enjoy some authentic fare at the Akis Tavern or the Christos Grill House Restaurant, before sipping a cocktail or two at Memories Cocktail Bar, famed for its delicious concoctions.

This, the Czech Republic's capital city, is perhaps one of the world's greatest destinations for single travellers.

Safe yet exciting and easily walkable, there's plenty to see and gallons of Czech beer to drink. Fly into Vaclav Havel Airport before heading into the city centre by bus. Depending on the service you catch and the time of day, this journey takes anything from 30 - 50 minutes - but the beautiful scenery will make the journey fly by. If you fancy a touch of luxury, rent an apartment from the Arcadia Residence; if you're on a budget, book a room at the Prague Centre Apartments, or at Hotel Antonie.

Your first stop should be the Old Town Square, where you can admire Prague's central feature - its astronomical clock tower.

Here, you'll find the town's famed market, offering everything from handmade crafts, to delicious local delicacies like trdelnick, which are fluffy, sugary pastries. Take a trip to Prague Castle (or Prazsky Hrad, to give it its traditional name) for spectacular views of the city and delve into its history. It's the official residence of the Czech Republic's President, too, making it doubly interesting.

As the daylight hours fade, take up a pew at one of the city's most authentic taverns, Staroceska Krcma, which serves up hearty plates of grilled meats and garlic soup. If you fancy something more exotic, take in the fare at Indian Jewel, or the Italian dishes at Ambiente Pasta Fresca.

The cultural capital of Russia, St Petersburg is often described as a 'magical' place thanks to its beautiful canals and impressive architecture.

Land in Pulkovo Airport before hopping on the line 13 or 39 bus to the local metro and train stations, which will take you into the city centre. If you can, secure a room at the Pushka Inn - a hotel renowned for its excellent service and beautiful rooms. The Four Seasons Hotel, Lion Palace St Petersburg is a popular choice too, thought budget-conscious travellers may well prefer the Hotel Mark Inn or Hotel Regina. The latter is in a particularly safe and friendly neighbourhood, so suits single travellers well.

Unpacked and orientated, take a stroll to the Hermitage Museum, an attraction filled with over three million artefacts and paintings/drawings. Wander through Nevsky Prospekt, the area's most famous street that's filled with great shops and picturesque buildings.

Take in the beautiful surroundings of the Peterhof Palace and Garden before heading to Café Abajour for some of the best steak in town. Or, feast on European treats at L'Europe Restaurant before taking in a drink or two at Café Trappist. If you're in the mood for a big bowl of pasta, Percorso might be more up your street - or for a taste of real Russian cuisine, grab a table at Chekhov.