There are plenty of sports and activities that you can experience during your ski resort visits, and snow tubing is one that can give you the same sort of fun and adrenaline that you can expect when skiing or snowboarding.

It involves riding down a slope on an inflatable plastic tube, similar to a ring that you would wear in a swimming pool. This enables you to glide along the snow, while holding onto the sides of the ring.

You don’t need to be experienced in the snow or have particular skills to enjoy snow tubing, while there is also no need to get training or practice before your first attempt. The lanes that are built in the snow help guide you in one direction, so you can just focus on enjoying your descent.

It is still important that you are protected from the unexpected during your trip, and we make it easy to ensure that you have cover in place before you travel.

How to get insurance for Snow Tubing

Snow Tubing cover is part of the Winter Sports add-on that you can include in your Columbus Direct policy for an additional fee.

It includes protection for your equipment if it is lost, damaged or stolen, as well as cover for avalanche delays and piste closures.

You are also protected for accidents that you might have on the slopes, while helicopter rescue is also included if it is needed to get you safely off the side of a mountain. 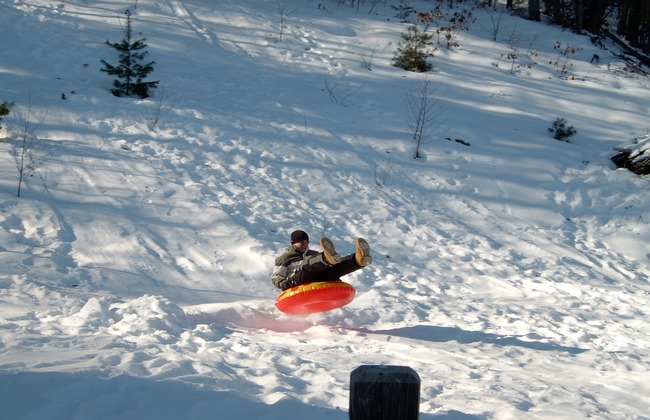 Get a quote today

Columbus Direct could save you money

GET A QUOTE NOW

How to stay safe when Snow Tubing

You should make sure that you are doing snow tubing in a suitable area that is designed for the activity. Many ski resorts will have slopes specifically designed for snow tubing, away from potential hazards and with a flatter decline at the bottom of the slope to help you come to a stop.

You should avoid attempting tricks or anything that might lead to your tube going out of control, as it can be difficult for you to get it back on the right path. In most cases the barriers that are built for the lanes should help you keep the right trajectory.

For extra safety, you might want to consider wearing a helmet to protect you in case you lose control during your descent.

When you are Snow Tubing, you should wear similar clothing to other winter activities, which includes several layers of clothes to ensure that you stay warm. Wearing layers also means that you can more easily control your body temperature throughout the day, as you can remove some clothing if you are starting to feel warmer.

You should also ensure that you wear suitable shoes and gloves so that you can keep your feet and hands warm and protected. For many people, the best shoes to wear are boots that provide extra warmth and are waterproof.