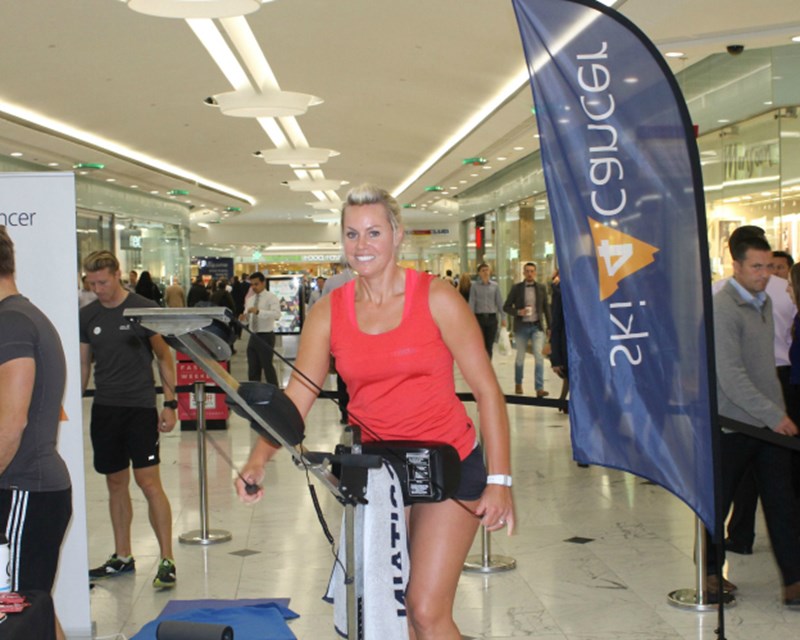 If you walked through Canary Wharf’s shopping centre on Monday or Tuesday, you may have seen a bunch of athletes working out on strange-looking cross trainers while shouting about breaking a world record.

If so, you’ll have witnessed the efforts of Olympian skier Chemmy Alcott and hardcore athletes Adam Libbey, Max Willcocks, Chris Brooks and Richard Gibbs as they raised money for Ski 4 Cancer.

This unstoppable team aimed to break the world record for the longest time spent on a cross trainer by exercising for 24 hours straight, and they covered hundreds of miles in the process. Oh, and they didn’t use any old cross trainers; they used Nordic Track equipment, which aims to faithfully reproduce the feeling of cross-country skiing. Judging by their red faces as they puffed their way through their 40-minute shifts, it was no mean feat.

The fundraiser was also organised to raise awareness of the athletes’ upcoming Arctic Challenge, which is taking place in March 2015. For three days they’ll be cross-country skiing across Greenland, again raising money for Ski 4 Cancer.

Rob Thomas, Regional Head UK, popped down for the day and was delighted with the amount of positive feedback the athletes received.

"It’s been so great to see the public learning about Ski 4 Cancer and donating to such a great cause," he said. “Chemmy and The Arctic IV have worked incredibly hard to organise today and their upcoming trip to the Arctic in March, and we’re behind them 100%."

Chemmy told us that she couldn’t wait to get started on her next adventure.

"You can’t just set up a donation page and expect people to support you – you have to be proactive," she said. "We came here for a 24 hour record attempt. The machines gave us an incredibly difficult workout, but it’s great for us for training reasons, and to make people realise how serious we are about the challenge in March. I only met the guys for the first time on Monday – and they seem  great!"

And what will she be up to after her 24 hour workout? “I’d love to say I’ll be going out for a curry, but I’ll have meetings,” she said, looking a bit wistful at the thought of a korma.

Chemmy and The Alpine IV finally finished at midday on Tuesday, and they're the proud holders of the Unofficial World Record for 24 hours on a Nordic Track Ski Machine. They covered 235 miles - well done, you lot!

If you’d like to support The Alpine IV and Chemmy, and donate to Ski 4 Cancer, click here.

← Flying Etiquette: How not to be 'that passenger'

Search your sofa for holiday cash →