Flying Etiquette: 12 Tips on how not to be 'that passenger'

Get your quote now
Home > Blog > Flying Etiquette: How not to be 'that passenger' 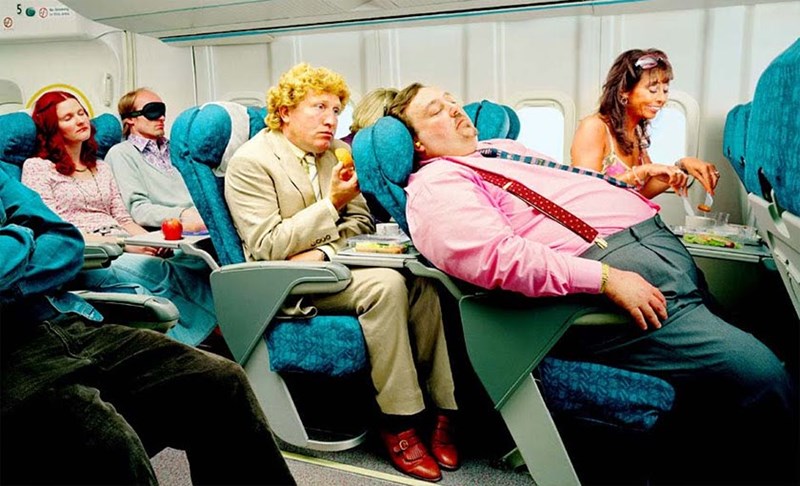 Yay! You're about to go on holiday! However, first of all you've got to tackle the thorny issue of the flight...

Some of us are nervous flyers, while others have been on more flights than they've had hot dinners. Some of us get excitable and chatty, while others are looking forward to a few hours of uninterrupted, unadulterated snoozing.

Regardless of the type of flyer you are, there are a few basic rules by which we all must abide to make the flight as smooth as possible.

We know you've been waiting for the gate to open for the better part of an hour, but so have your fellow passengers. Your seat will be there waiting for you when you eventually board the aircraft, so there's no need to start hustling and bustling past people when you're walking down the jet bridge. Besides, if someone is sat in your seat, just show them your magic ticket. Watch smugly as they scurry away looking peeved.

Don't bang heads with your bag

The carry-on bags we take on holiday with us are often small enough to avoid checking them in but heavy enough to cause a few issues. If you're having a bit of trouble finding your seat or spotting space in the overheard compartments, be careful to make sure you don't clock someone on the head with that heavy bag. It will make the rest of the flight very awkward.

Book an appropriate seat in advance (if possible)

There's an unwritten rule of flying that should always be obeyed, when possible. If you're flying alone and have a choice of which seat you book, opt for the one that best suits the type of flyer you are. Are you planning on dozing for the entire flight? Book a window seat and enjoy the view before you drift off. Do you tend to get up a lot to use the toilet? Book an aisle seat. Do you tend to leave it to the last minute to book flights? Then you're probably used to the middle seat anyway.

Once you've taken your seat, by all means get comfy. Don't start leaning across the aisle to chat to your friend or leave your arm or leg poking out, though - let everyone else get to their seats first. If someone bumps into you when they're trying to squeeze past and you're not minding the gap, you'll only have yourself to blame.

Three seats; four armrests. Technically there's one for each of you and one 'spare', so don't go and spread yourself out in a bid to mark your territory. Be considerate of the person in the middle seat, too. Is it their own fault that they have nowhere to rest their head or stretch their legs because they left it too late to book? Perhaps. Even so, play nicely.

Think before you recline

Reclining seats have been all over the news lately after a six-foot-one passenger used 'knee defenders' - small contraptions which you attach to your dinner tray, preventing the person in front from reclining - on a domestic US flight. The argument that broke out between the two passengers caused the flight to be diverted to a closer airport. If you're tall, kindly ask the passenger in front of you if they would mind keeping their chair upright for the duration of the flight. If you feel the need to recline, kindly ask the passenger behind you if they wouldn't mind, and let them know when you're going to do it so you don't spill their drink. As long as you do whatever it is you're going to do kindly, then everything should be OK.

You'll know from home that if you are awoken from your slumber it can be hard to doze off again, but it's arguably several degrees harder when you're flying 30-odd-thousand feet in the sky. If your neighbouring passengers look intent on sleeping, don't start making conversation - or if you do, make sure it's an interesting one.

Chat to the nervy

On the flipside, if a neighbouring passenger is terrified about flying, help to calm them down with a bit of friendly conversation. A five minute chat is nothing to you, but it could mean a whole lot to someone else.

Although the plane is loud, set your tunes to a reasonable volume so as not to bother your fellow passengers - blasting Tango in the Night at full volume will win you no friends. Apart from the odd Fleetwood Mac fan.

When eating, keep the mess to a minimum

Unless you're flying in an upper class, plane food isn't everyone's idea of an ideal meal. Don't make it worse for your neighbours by chewing with your mouth open, spilling your drink and letting food fly off your fork onto someone else's lap.

Have a drink or two, sure, you're on holiday after all - but don't get too sozzled on the flight. Starting your holiday with a hangover isn't good for anyone. However, we know that you'll have the obligatory 5am pint at the airport. Everyone does. It's fine.

Unless your wife is about to give birth or your life literally depends on it, remember that everyone is in a rush to get off the plane - not just you. Pushing to get off the plane won't achieve anything, except inspiring the hundreds of other passengers you've annoyed to move as slowly as possible when they're in front of you.

Don't forget - these people will probably be on your flight home, so if you play up now, you'll almost certainly be paying later...

← What does your luggage say about you?

Chemmy and The Alpine 4 Ski Round Canary Wharf →