Digging deep: The ten best cemeteries around the world

Get your quote now
Home > Blog > Digging deep: The ten best cemeteries around the world

You might be a king or a little street sweeper, but sooner or later you dance with the reaper. Well, that’s what Bill & Ted’s Bogus Journey taught us - and what better way to remember your mortality than while you're on holiday? We’ve compiled a list of the best and most awe-inspiring cemeteries in the world - make sure that you tick them off your bucket list. Pun intended.

Divided into two parts and restored to its former glory after falling into disrepair in the last century, Highgate is still a must-see if you’re visiting London. You can explore the east part of the cemetery on your own, but you have to pay to see the western section, as it’s part of a guided tour. The cemetery itself pays homage to the Victorians’ obsession with gothic splendour, and the overgrown graves are a brilliant haven for wildlife. Looking for famous residents? Douglas Adams, Karl Marx, Christina Rossetti and George Eliot are all buried here. 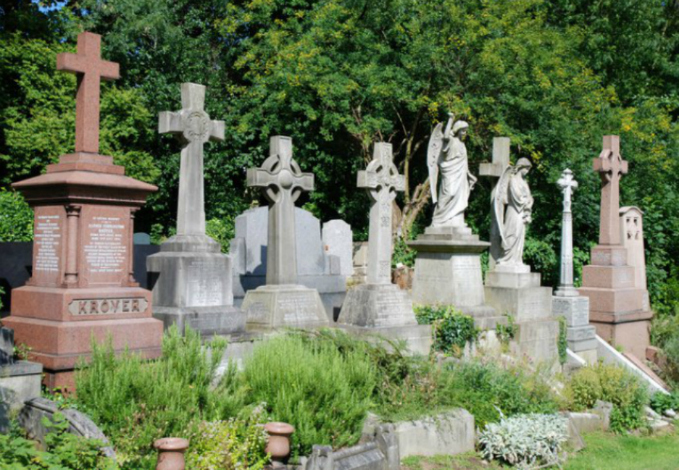 Overcrowding was rife in Paris cemeteries in the 1700s, and Montmartre was opened in January 1825. It was initially known as La Cimetière des Grandes Carrières (Cemetery of the Large Quarries), as its name referenced the cemetery's unique location - an abandoned gypsum quarry, which had previously been used during the French Revolution as a mass grave. It's still a popular tourist area as many celebrities have been laid to rest there, including Egyptian singer Dalida, Edgar Degas and Gustave Moreau.

This is the city that doesn't let anything - even death - spoil the party. Funerals here are accompanied by the sounds of jazz bands, and the above ground tombs are a sight to behold. Fun fact - people are laid to rest above the ground as New Orleans’ high water table means that coffins buried underground sometimes float to the surface again. One of the most famous residents is local legend Marie Laveau, the Voodoo Queen of New Orleans. Visitors still leave candles or coins on her tomb to try to channel good fortune.

Fancy a cemetery where they dead come back for one last gasp? This slightly-chilling crypt, which is comprised of several tiny chapels located beneath the church of Santa Maria della Concezione dei Cappuccini, is lined with bones (literally - they even adorn the walls and light fittings). Decomposing monks, still in their habits, have been tied to the walls - their hands arranged in prayer. It’s definitely not one for small children, but this is a place to go if you want to soberly reflect upon your own mortality before a lunch almost entirely comprised of red wine. Watch out for the placard at the end which reads ‘What you are now we used to be; what we are now you will be...’.

If the bones in Rome didn't have you feeling a bit nauseous, this crypt will. Palermo's Capuchin crypt is full of the gently decomposing bodies of the local elite, who demanded the same service as the local monks. Today, the crypt holds an estimated 8000 corpses, all dressed up in their Sunday best. The dead are hung from hooks in the wall and displayed in their coffins; steer clear if it’s a hot day and you’re prone to squeamishness. 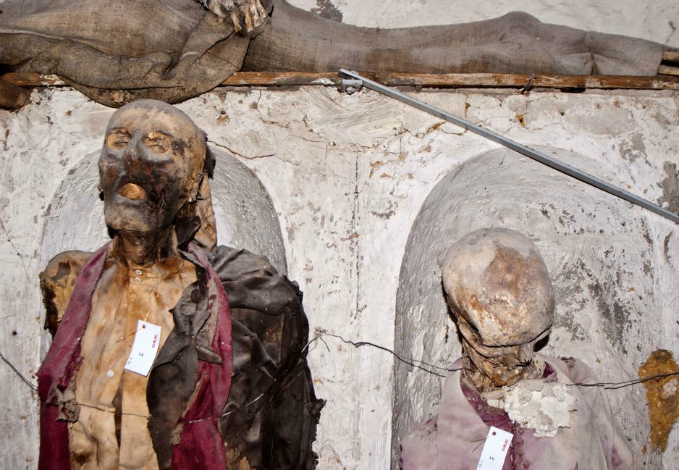 Death’s no laughing matter, but we’re guessing artist Stan Ioan Pătra thought differently. In 1935, he began commemorating the graves of his neighbours with painfully honest, often brutal slogans. For example, on a womaniser's tomb, the inscription reads: ‘One more thing I loved very much, To sit at a table in a bar, Next to someone else's wife’. After he died, Pătraş' apprentice, Dumitu Pop, took over the job. Pătra now lies with the very people he mocked in life; let’s hope that doesn't make for some awkward afterlife conversations.

This is the country’s oldest cemetery, and although it contains 200,000 graves, it's remarkably tranquil. Towering trees, cobbled paths and moss-covered lanterns and statues ensure visitors feel relaxed rather than overwhelmed, and if you’re after a quick celebrity spot, the mausoleum of the revered monk, Kobo Daishi, is a sacred pilgrimage site. Look out for the touching modern memorials, including a giant cup for employees of a coffee corporation and a rocket for employees of an aerospace company.

Located in the former Jewish ghetto, this derelict graveyard is the very picture of Gothic gloom. Founded in the 15th century until it reached its limit in 1787, visitors here will soon suss that the graves here are piled on top of one another - but there’s a good reason for that. According to Jewish law, Jews must not destroy Jewish graves, and they are not allowed to remove tombstones. This meant that when they ran out of space, extra soil was placed on top - resulting in 12 layers of graves.

Surely you’ve heard of the Day of the Dead? Every November 1, a day after Halloween, Mexicans celebrate death in a very different way at Xoxocoltan Cemetery. Mexico's Day of the Dead isn't as macabre as it sounds; it's a fun and easygoing celebration of life while remembering the dearly departed. Families head to the graves of dead relatives to decorate them with candles, gifts and marigolds, then settle down for a nice picnic, crack open the mescal, and watch mariachi bands.

How’s this for morbid? The people of Norfolk Island know where they’ll all end up one day - the island’s pretty shoreside graveyard, which is believed to have been established during the Island's second settlement in the 1820s. Chillingly (or, perhaps, thoughtfully), the groundskeeper knows most of the island's 2,000 residents, so he always leaves space for families to be buried together. Outside of the cemetery fence, the graves of 13 convicts who attempted a rebellion lie in Mutineers’ Mound - in unhallowed ground.

← How to get fit and fight the flab at your desk

The household life hacks you shouldn't be without →