Greece is listed as a top 10 destination for Brits to visit this year according to 2014 ABTA Travel Trends, and with cosmopolitan islands and great value for money, it’s as clear as the waters surrounding it why. From the dazzling cultural beauty of Spartan ruins to spectacular white sand beaches and ancient cypresses, you’ll find you still have time for an intense nightlife experience. This short video ‘Postcards of Blue’ was recently released by Visit Greece and is crammed with the best of Greece to whet your appetite.

The Greek people use their history and land to continue many ancient traditions for you to enjoy, including sharing their food, and getting to know the menu is as invigorating as the landscape.

To make heads and tails of traditional foods, check out this A-Z glossary. Find the recipes and ingredients you need to bring the flavours of Greece to your table with Yolenis Mediterranean food and tastes. We asked them about the best Greek summer dish and they said, a “Greek salad full of fresh summer vegetables and olive oil, making it a full healthy and refreshing meal. The ingredients are easily found all over Greece which is why the salad is very popular”. I found a version on their website from the Islands of Cyclades, a Greek salad with kalathaki cheese from Lemnos, cut thick and grilled to lie over three types of cherry tomatoes. 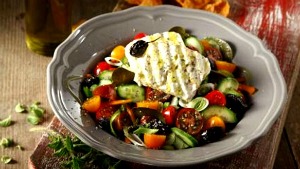 A Greek tradition that should be avoided when on holiday is one of social protest. But what do you need to think of in terms of your safety in a country that has seen a fair amount of social unrest and austerity? The Greek Reporter has said that Greece is on the Economists list of countries at ‘very high risk’ of demonstrations and social unrest during 2014. Greece is the only European Union country to be among the top 20 countries at ‘very high risk’ and civil violence is something to be mindful of when travelling to Greece.

Central Athens saw an incident this April with a car bomb going off outside a Bank of Greece building in central Athens, timed to occur just hours before Greece’s first foray back in to the international bond market and a day before a visit by German Chancellor, Angela Merkel. There is a general threat from terrorism and acts of political violence like small-scale attacks against politicians, journalists and businesspeople.  As a tourist you will hopefully be enjoying the beaches, sailing, walking amongst ruins, and not in the areas targeted, but you may stumble upon a protest. Travel insurance generally excludes claims caused by civil unrest so keep your distance.

The FCO travel advice page for Greece advises that although demonstrations can be called at short notice, there are certain dates on which demonstrations traditionally occur: 1st May, 17th November, and 6th December. The page warns that police have used tear gas; road closures are common in Athens and protests often occur in major squares, particularly Syntagma Square.

Some boarders are militarily sensitive so avoid taking photographs or video footage near them if you’re cruising the islands on a yacht, and when driving be careful as there are three times the road deaths per population than in the UK. Make sure the car is insured and if you are asked for your passport as a form of security, do not hand it over under any circumstances.

It is prudent to have comprehensive travel insurance and sufficient medical supplies for the duration of your stay including any possible delays, as facilities although generally good on the mainland are limited on the islands. There have been reports of hospitals and healthcare providers refusing to honour EHIC cards  across many southern European countries, so here’s a list of emergency numbers and a list of clinics that facilitate the necessary health care you may need. There’s a good list of travel tips, passport and visa information, transport information on the Visit Greece website.

The good news is that Greece has posted a record year for tourism in 2013 with 2014 looking to be even better, and there have been some positive marks hit in getting the economy back on track, with Greece successfully returning to the bond market. Start your holiday now by checking out which locations you would prefer to visit by trawling the social media pages on Visit Greece’s website including the eye-watering Instagram, colour laden Flickr and the random gorgeous moments of Pinterest and Facebook.