Part two of the complete guide to driving Route 66 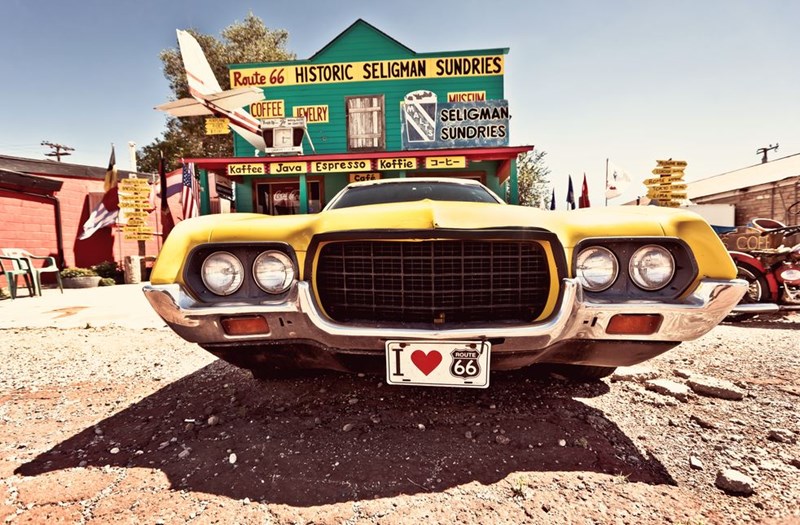 Winding your way 2,451 miles across America along the legendary Route 66 is a dream come true. The ever-changing, exciting landscape will always stay with you.

To say that there are 'lots of things to see and do' along Route 66 would be putting it mildly. Where do you start? Well, probably in Illinois, actually.

Things you must see and do:

The starting point is the Windy City itself, Chicago, which is definitely worth a look around. If you do nothing else, head for 360 CHICAGO, formerly the John Hancock Observatory, for some amazing views. If you're brave enough, try the dizzying TILT which extends 1,000 feet up in the air at a 30 degree angle. En route to Missouri, stop at Pontiac, which is a small town famed for its murals, which feels as though it's still the 1950s and Springfield, where Abraham Lincoln (not Homer Simpson) lived for 17 years.

Meet me in St Louis:

As you cross the border, you'll reach St. Louis, the city depicted in the eponymous (and wonderful) Judy Garland musical. Marvel at the 630 foot steel Gateway Arch; those with a head for heights can climb up to the top while those left below are advised unreservedly to seek out the Ted Drewes Famous Frozen Custard stand, which has been ranked the number one restaurant in St Louis on TripAdvisor.

As you continue on your way, look out for the eerie Devil's Elbow Bridge and Red Oak 2 in Carthage, which is a reconstructed 1940s town.

Onwards to Kansas, and though you're really only dipping your toe in, it's worth stopping at Galena and visiting the cars on the Route gas station, outside which is an old tow truck painted with a face. This is allegedly the inspiration for Tow Mater, a character from Pixar's Cars. Riverton is a delightful town, boasting an sweet souvenir and bric-a-brac store plus the Marsh Arch Bridge, which is the last remaining rainbow-shaped bridge featured on R66.

We’re not in Kansas anymore:

Before you know it, you'll be over the state line and in Ohhhh-klahoma! This is Indian Territory, and at over 400 miles, there's a lot to see. Oklahoma City itself is huge and presided over by the grand State Capitol building. Mind your wheels when reaching Narcissa; you'll hit one of the oldest stretches of road on the entire route, which is a relic from 1922, a section which, due to lack of funds, is only paved in the middle forcing motorists to drive on gravelly surfaces.

Totem Pole Park near Foyil boasts the world's largest hand-carved example and the Route 66 Museum in Clinton is definitely worth a stop - it is considered one of the very best such museums on the route. Our experts tell us not to miss Pops in Arcadia, a shop which sells over 400 types of soda and features 'the world's largest soda bottle'. Get that camera at the ready.

Now we're really into the Deep South: Texas. As the USA's biggest producer of beef, all you meat-eaters must sample some steak at the renowned Big Texan Steak Ranch in - wait for it - Amarillo. Those that are up for a challenge could try the 72oz, then perhaps help it go down with a visit to the nearby Cadillac Ranch. This attraction comprises ten Cadillacs wedged upright in the sand and visitors are encouraged to graffiti them. Not your usual tourist activity, that's for sure. If you are hanging about for a day or so, go to one of the cattle auctions and watch real cowboys clamour to buy stock. Another popular stop is the Midpoint Café in Adrian, famed for its 'Ugly Crust Pie' - the fillings change daily.

On the border of Texas and New Mexico is Glenrio, a 'forgotten ghost town' - once a favourite stopping point for those on the route to rest up, it suffered with the construction of Interstate 40 and slowly all its residents moved away. In its abandoned state, the town has ironically become a 'must see' on R66. Heading deeper into New Mexico, you must take a slight detour to the Blue Hole in Santa Rosa. This is a natural lake which is constantly warm, but very deep and loved by swimmers. Other places worth a stop include the 66 Diner in Albuquerque for a wonderful example of classic 1940s architecture and Los Alamos, which is the home of the atomic bomb - the rule is: you can talk to the locals, but don't ask them what they do!

Next you'll arrive at the deserts of Arizona. This dry landscape is the gateway for the Grand Canyon (a slight detour but one clearly not to miss), the nearest town to which is the delightful mountain town of Flagstaff. Before you reach that, stop at the wonderfully-named Petrified Forest National Park in Chambers, which features a landscape of fossilised tree trunks - don't baulk at the idea until you've seen it - that together with colourful rocks form what's known as the Painted Desert. Animal lovers might like to stop in Oatman, a former gold mining town which has been beautifully restored but where the real attraction are the freely-wandering mountain donkeys that you can feed.

You've entered the final state on the route, California, though there are still 315 miles to explore. If it's your sort of thing, deviate to Las Vegas, if not, carry straight on to Needles, which is the hottest desert town in the whole country. You can't go to California and not stop in Hollywood, of course. See the famous sign from the Griffith Observatory, walk along the Walk of Fame and check out the stars' hand prints outside the TCL Chinese Theatre. Your last stop is Santa Monica, where the Pacific Ocean awaits you and the pier signals the end of Route 66. What a journey, eh?

Speak to the locals:

You'll meet many people on your journey and it definitely pays to stop and chat to some of the locals. Our experts emphatically encourage you to stop in the small towns; have a coffee and a soda in a local diner and chat to people.

Residents in these spots relish talking to visitors and have some incredible tales to tell - their stories will make your route. Whether at a tourist site, an ice cream parlour or a gas station, don't be afraid to strike up a conversation. The shop keeper at Mr C's Routepost in Lebanon, Missouri, is said to be a great source of anecdotes, whether or not you want to buy any of his wares.

Things you can miss:

As we've inferred, there is a lot for you to see and do as you motor down Route 66, but you certainly don't have to do it all. Our experts say that there's no need to stop at every gift shop or museum, as you'll soon find they're all the same. Stick to the one(s) that are recommended.

Some say don't bother with a detour to Las Vegas as it's so far off the original route. Ultimately, it's up to you, but if you are pushed for time, it's worth checking reviews or consulting your guide to determine whether a specific attraction is worth stopping for. You don't have to do everything, though!

Missed part one of our guide to driving down Route 66? Fear not - you can read it here...

← Part one of the complete guide to driving Route 66

How to spot a Brit abroad →