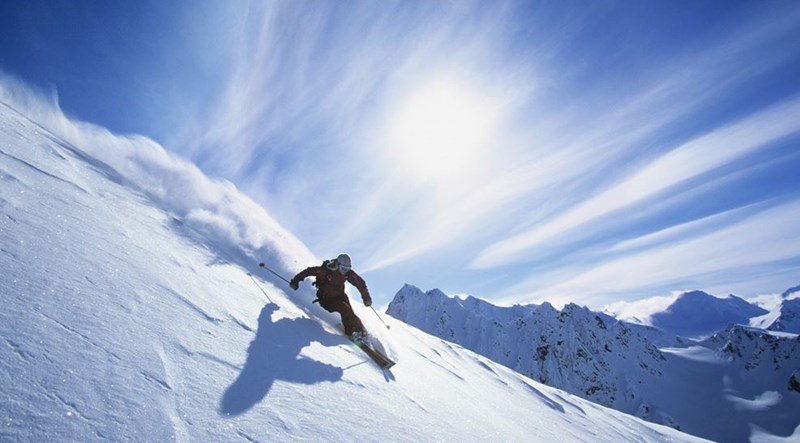 With so many incredible resorts not that far from our doorsteps, a ski break isn't one that needs to be confined to the annual two-week getaway. Imagine telling your colleagues at work that instead of watching The X Factor and walking the dog at the weekend, you attempted the red run at Val d'Isere?

It's perfectly possible and, quite frankly, a fabulous way to spend what might otherwise be a same-old Saturday and Sunday. Leave early on a Friday afternoon and grab an evening flight, with a return booked for Sunday - easy. To demonstrate our point, here are four top ski weekend short break destinations:

Chamonix-Mont-Blanc, to give its full name, is a hugely popular destination, particularly with weekend skiers, as it's only 54 miles away from Geneva airport. It comprises six ski areas that are fairly spread out, interspersed with picture-postcard villages. The resort is known for its challenging slopes, and with a reputation for being somewhat hardcore, you'll see lots of extreme 'freeskiiers'. However, the lovely scenery and number of gentle pistes should keep the more adrenalin-avoiding skiers happy.

It's incredibly easy to reach; there are lots of flights to Geneva from various UK airports, but the prices will reflect the seemingly-constant high demand for weekend travel - the 1.5 - 2 hour flight could cost you £400. There are lots of buses and trains heading to the resort from Geneva airport, so transfers shouldn't be a problem, though it might be an idea to hire a car for the weekend to make sure no time is wasted in reaching the various ski bases.

This seasoned resort boasts a cornucopia of chalets and hotels that will gladly accommodate guests on a shorter-term basis. If you don't want to break the bank, Hotel Eden might be a good bet; inexpensive, it's also situated close to the Flegere lifts providing optimum time on the slopes. For something a little more extravagant, Les Chalets de Philippe is a group of seven luxury chalets with all mod-cons including private hot-tubs, home cinemas and views of the stunning Chamonix valley.

Situated on 'the Italian side of Mont Blanc', Chamonix's border-adjacent neighbour is a charming yet chic, cobbled village. Linked to Chamonix, it also has its own ski area and most people tend to stay there. Courmayeur boasts the seemingly never-ending Cresta Youla red run and some incredibly scenic off-piste skiing that is worth exploring with a guide. It attracts locals from Turin and Milan, but apparently most of them don't venture onto the slopes.

It's also an easy spot to reach, making it a popular mini-break option. There may not be the same nerve-exploding pistes here, but fans seem to love the combination of mountain restaurants and fairly compact ski area. Being on the 'sunny side of Mont Blanc', there are some incredible views. Via Roma, the pedestrianised village square is the central point of the resort, around which are located the various bars, cafes, restaurants and boutiques.

Close to both Geneva and Turin airports, the resort is easily reached in under two hours. The SBB train will get visitors as far as Aosta, where you can catch the bus to Courmayeur. Alternatively, motorists on the Swiss side should head for the Mont Blanc tunnel, while the Val D'Aosta tunnel facilitates the journey from the Italian side.

There are lots of hotels with many operators offering some great weekend deals if you look around. Two minutes' walk from the Plan Checrouit ski lift is highly recommended Au Coeur Des Neiges, which combines rooms, apartments and chalets with a wellness centre and cosy open fires. Another popular place to stay is the Auberge De La Maison, which is nestled at the foot of Mont Blanc, in the Entrèves area, eight minutes away from the Monte Bianco ski lift.

Situated 1,000 metres above Lake Luzern, this is a small resort with big ambitions, offering great on-piste skiing and fabulous bars. As such, it's a great spot for serious skiers who like to party. The action focuses on the brilliantly-named Mount Titlis, which features long powder runs starting at 3,000 metres. Experienced skiiers enjoy the off-piste runs which incorporate the 1,100m, 30-45 degree Laub. Less confident skiers tend to hang around Brunni, a great area for beginners and intermediates.

The area is rather underrated, experts say, but is fast-becoming the ski resort of choice for those that are searching for 'deep-snow thrills'. It also boasts some interesting and old architecture, with many of the local hotels dating back to the start of the area's venture into tourism. In the spring and summer time, the resort becomes a sought-after Bollywood film location, but winter remains the preserve of those on skis and snowboards.

Direct flights from London, Manchester and Bristol will get you to Zurich airport in under two hours, with the prospect of an hour and a half straight-forward transfer by road or a convenient two hours straight into town by train.

There is a lot of choice when it comes to finding accommodation, but reviews place the Spannort Hotel and Restaurant at the top of the list. Centrally-located and perfect for the station, this hotel offers great views, fabulous breakfasts and beautiful rooms. There's also a golf course, should time allow for a quick round. Hotel Garni Hostatt is equally rated for it's rustic, family-style atmosphere and excellent customer service.

A lively resort, Morzine is one of 14 within the Portes du Soleil ski area, on the French-Swiss border.

While great for beginners, with several nursery slopes and some great English-language ski schools, it also teems with runs for the more adventurous and experienced skier. It also manages to retain its quaint mountain-village feel, despite the plethora of ski-holiday facilities in residence. In an area with fluctuating temperatures, experts recommend booking this at the last minute, to ensure that the conditions are right. In warmer weather, skiers have been known to have to travel down the slopes via a tractor-mower.

If you're thinking about going to Morzine for a quick weekend, then it might be useful to check out the resort's very own magazine, Yodel. Published monthly, it provides some great information about the area, what to see, do and what's on.

You'll be spoiled for choice on the dining front, with lots of cafes to tempt you with delicious pastries and good coffee, not to mention the array of high-end restaurants.

L'Atelier and Le Mas de la Coutettaz are especially recommended, so long as you don't mind paying upwards of €40 for a meal. For apres ski, then there's only really one place you should head: Robinson 'Robbo's' Bar. Unlike many others, it offers a single, potent local beer on tap and doesn't play music. Yet this place has a reputation that far exceeds the area and is definitely worth a try.

Served by Geneva airport, flights are plentiful from the UK but demand is high over the weekend. Upon arrival, Morzine is 90 minutes away by road. Transfers are abundant, as are the opportunities to hire a car.

Experts advise that caution should be taken when selecting accommodation in Morzine. There are many options, but can be widely spread about, necessitating clever interpretation of the confusing bus timetables. No problem if you've hired a car, of course. The Travellers' Choice 2014 winner, Chilly Powder, is a small hotel which has been hailed for its 'house party with friends' feeling. It's ideally located for the Avoriaz cable car. Alternatively, the Chalet Hotel Fleur des Neiges is a pretty, traditional wooden building which is just five minutes' away from the action.

The above are just four of the most popular ski resorts; there are obviously many more to choose from if you have perhaps a little more time. Even so, hopefully this will have sufficiently whetted your appetite to make you consider jetting off for a weekend of snow, sun and ski. It's better than The X Factor, that's for sure.