What are the most Googled landmarks around the world? 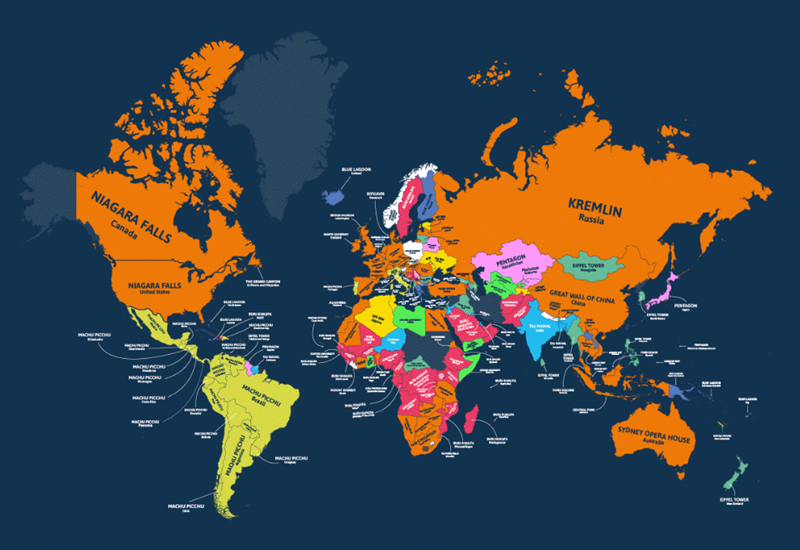 National landmarks are often among the biggest attractions for tourists, and they can often become a leading reason for why someone might decide to visit a country. Some are known for their long history and impressive architecture, while others provide stunning views and once-in-a-lifetime experiences.

Many landmarks become important to their country’s identity. They often feature on official documents and bank notes, while visiting them is regularly at the top of many people’s bucket lists.

Our research found that The Taj Mahal is the world’s most Googled landmark, with over 1.4 million searches being made each month. The mausoleum can be found in Agra, India next to the Yamuna River, after being built by Mughal Emperor Shah Jahan in the 1600’s.

Its impressive, symmetrical architecture and the distinct white marble exterior has made it a site that attracts millions of visitors each year. It has also featured in 1.3 million tags on Instagram and is a UNESCO World Heritage site.

The second most-searched landmark is Machu Picchu in Peru, which was first built during the 1400’s and was abandoned around one hundred years later because of the Spanish conquest. Its remote location meant that it remained mostly unknown to the rest of the world until its rediscovery in 1911. The area is a big part of the history of the Incan Empire and it is often considered to be among the seven Wonders of the World. Its popularity means that it receives around 1.26 million google searches it receives worldwide each month.

Third on the list is the Burj Khalifa in the United Arab Emirates, with over 1.1 million searches. It is one of the newest landmarks to feature, with construction finishing in 2009. Since then it has been recognised as the tallest structure in the world, with a height of 829.8m.

The rest of the top five is made up of Niagara Falls, which receives 945k searches, while the Eiffel Tower has around 916k searches each month.

The United States of America is the only country that features twice on the top 10 list, with the Statue of Liberty coming in eighth with around 3.5 million people googling the statue each month. It is an instantly recognisable structure and attracts millions of tourists each year. In tenth place is the Pentagon which has over 730,000 google searches each month.

The UK also has two of its own landmarks in the top 20, with both the Big Ben and London Eye receiving over 540,000 searches on Google.

If you are looking to visit landmarks that might be less busy than some of the higher ranked spots, there are plenty of famous locations that are just as stunning and historical but less likely to be as crowded as somewhere like the Taj Mahal or Eiffel Tower.

The Brandenburg Gate in Berlin didn’t have as many Google searches as the top 10, but it is an impressive structure that forms an important part of Germany’s history. Natural landmarks like the Uluru Ayers Rock in Australia and the Iguazu National park in Argentina are also must-visit locations for many tourists, but their search volume isn’t as high as other areas, so they may be better locations to travel to if you want to avoid the bigger crowds.

← Scenic cities to propose to your partner on Valentine's Day