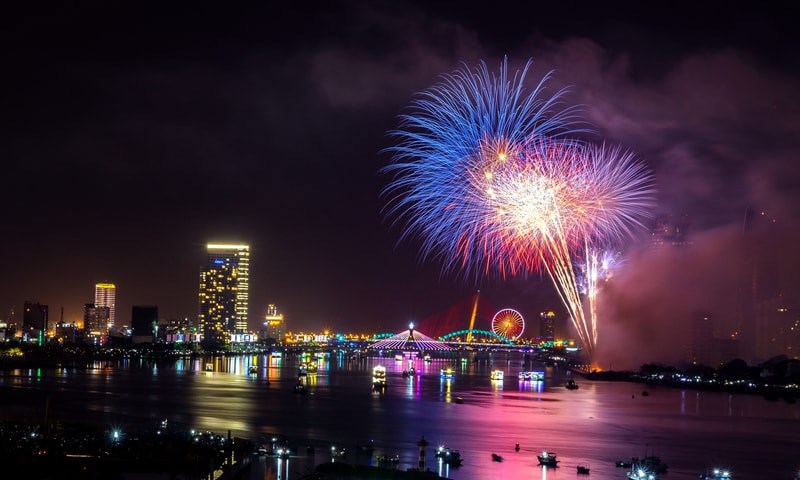 You may spend New Year’s Eve with your family and close friends, enjoying food and drinks, you may be heading to a ticketed event, or even heading to your local church for a watchnight service – or you could be dreaming your way into the New Year! But if celebrating the turn of the year is something you enjoy, then these destinations should be on your bucket list.

New York hosts the pinnacle of New Year celebrations, you’ve all heard of the Times Square Ball Drop. It’s certainly a sparkling event, considering the ball itself is encrusted with 2,688 Waterford crystal triangles sat on top of 32,256 LEDs – this really is the star of the show.

People have been gathering to welcome the New Year at Times Square since 1904, so the tradition spans over 110 years. Due to its long history, around 1 million people attend the event – so it’s best to get there early with plenty of food and drink (mainly because street vendors are banned from Times Square for the event).

Arriving early has more perks than just getting a good view of the ball, the Times Square Alliance Sanitation Crew distribute party favours including hats, glasses, noisemakers and more to the early birds – a fantastic memento, and it means you don’t have to buy your own! And if you can’t make the big event but still want to see it, there’s a live webcast which will make you feel like you’re there. 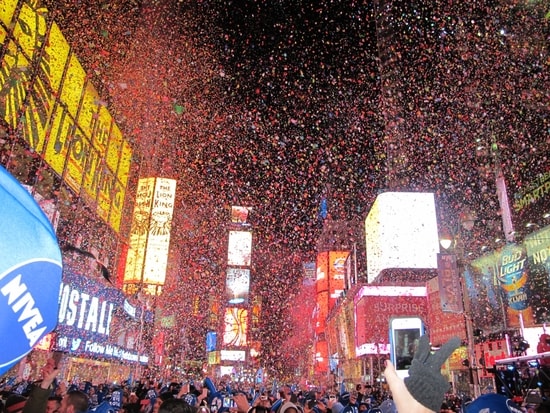 Standing like a beacon in the night, the Burj Khalifa is undoubtedly the best spot to gather and watch the New Year’s celebrations unfold. Arrive as early as 6pm to secure your spot for the night, right by the Dubai Fountains so you’re able to see the amazing light and fireworks show on the Burj Khalifa, and the water show in the famous fountains.

You’re also encouraged to book a table reservation at a restaurant if you’d rather celebrate by eating good food and relaxing with friends. A good place to book would be at Souk al Bahar, located just next to the Dubai Fountains, a good table will mean you can enjoy the show without being caught up in the crowds at the waterfront.

If you’re travelling as a family, Atlantis The Palm have a great kids go free offer when you book. The resort has 18 restaurants, cafes and bars (not including the waterpark restaurants) so there will be something suitable for everyone. Fantastic fireworks and exciting entertainment which includes arts and craft, slides and bouncy castles to name but a few will be sure to keep the whole family happy. If you’re not staying at Atlantis, head to Palm Jumeirah Boardwalk for a great view.

It’s not just all about Dubai though. It wouldn’t be a firework display in the UAE if it didn’t have a world record, would it? In 2018, a giant firework was propelled into the night sky just after midnight – it was 56 inches wide (142cm), and weighed in at 2,400lbs (1,088kg) which is around the same kerb weight as a Ford KA! The grand firework lit up the sky over Al Marjan Island in Ras-al-Khaimah, which provided a great alternative to the ‘Light Up 2018’ show in Dubai. 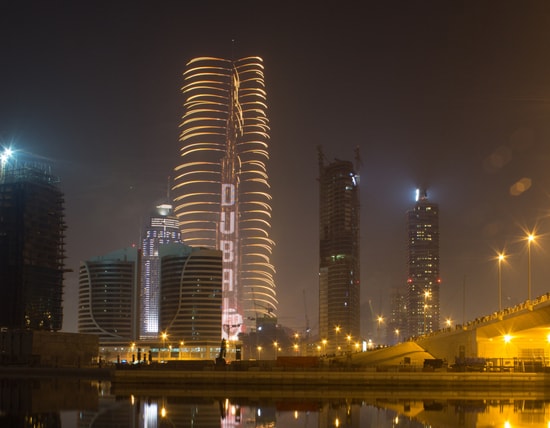 Okay, we get to see these fireworks on the TV every year, but have you ever considered heading to the big smoke? Yes, it’ll be cold, and more than likely will be quite soggy, but you shouldn’t let that put a dampener on your evening. This year’s event is ticketed, so make sure you don’t forget to bring it with you!

TFL are putting on free travel across the network to help revellers travel around the capital from 23:45 on New Year’s Eve, until 04:30 on New Year’s Day, so you’ll be able to use the free service to get home from the festivities. If you’re not heading into the city, there are many places outside of Central London which will give you a great viewing point. Primrose Hill, Parliament Hill, Greenwich Park and Alexandra Palace are popular sites to gather a bit further afield.

The main event will be taking place at the London Eye once again, having been hosted here every year since 1999/00 (except 2000-2003), when an estimated 3 million people turned up and snaked around the Thames to get a good look at the millennium fireworks.

The big difference with the New Year countdown this year, is that it could all be digital. Big Ben’s clock hands were removed in April, and it’s unknown whether it will chime due to the ongoing repair works – let’s hope they get the timings right!

Viva Las Vegas - hosts of America’s Party! This free New Year’s Eve event is essentially a huge street party, whereby the Las Vegas strip is closed to traffic, culminating in a huge fireworks display from the roofs of many of the casinos on the strip including Aria, Caesars Palace, MGM Grand, Planet Hollywood, Stratosphere, Treasure Island, Venetian and the Rio. For an amazing view, we’d recommend taking a trip to the Stratosphere, where you’ll be able to see the entire strip.

It’s not just fireworks though, casinos, bars and nightclubs host parties with some well-known celebs and DJ’s, which may not be suited for everyone, but provides a great option for an indoors location – the desert gets cold at night! Many of these require a ticket, and it would be wise to decide where you want to go, then book at early bird prices.

The Fremont Street Experience will have live entertainment, light shows, and a guest appearance from the mayor, Carolyn Goodman to boot! It’s all kicking off from 6pm for wristband entry – the mall closes to the public at 5pm ready to be set up for the evening’s festivities. For the brave ones among you, you’ll be pleased to know that Slotzilla zip line will be running until 1am, so book your flight for a super exciting New Year’s Eve!

Getting home (or to your hotel) after the event at Fremont Street might take a while, but guests who use Lyft will be able to get $20 in free ride credits! For those who are designated drivers, the parking garages will remain open all night, meaning you can leave when you’re ready. Get home, but safely. 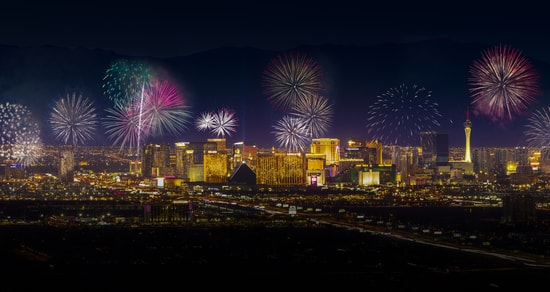 A popular city break, and somewhere a little closer to home, Madrid offers something for everyone on Nochevieja. Whether you’re looking for somewhere to boogie the night away to your favourite songs, fill up on traditional Spanish food and sample some fine wine, or join the locals for a fiesta, you can experience all of this in Madrid on New Year’s Eve.

If you’re a party goer, you’ve chosen the right place! The nightlife is cranked up a notch, and you won’t ever be too far from a party. Although the parties (cotillones de nochevieja) generally don’t start until about 10pm here (once people have had enough food to fuel the night), they carry on through to the early hours of the morning, when breakfast consists of hot chocolate and churros!

If you like to celebrate with the crowds, head to Puerta del Sol where the main New Year’s celebrations will take place. The clock served as the marker of the official time in Spain for many years, and when it strikes midnight, the tradition is to eat a grape for every strike of the bell to bring you a year of prosperity. However, if it’s a quieter evening you’re looking for then head for Plaza de Santa Ana where there are plenty of bars to accommodate you.

For a final feast of the year, the oldest restaurant in the world isn’t a bad suggestion. Touted as Ernest Hemingway’s favourite restaurant, Botin was founded in 1725 and specialises in Castilian cuisine – the meats are cooked in an oven which is nearly 300 years old! The suckling pig is their speciality, definitely one to share between quite a few of you! 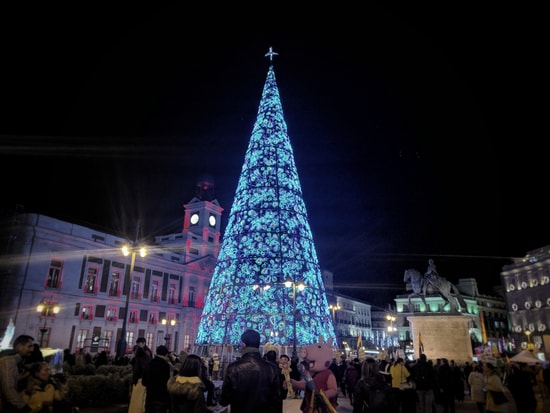 And if you want to experience the clock strike midnight twice, you could fly from Sydney to Hawaii. Moving East across the date line means that you’re effectively travelling back in time, so a 9.5 hour flight leaving Sydney at 2am (local time), will see you land in Honolulu just before 4pm (local time), ready to shout HAPPY NEW YEAR, and pop the corks once again! However, you’ll need nearly £18,000 and 12 other committed mates to make this dream a reality!