Thanking her right leg on Twitter, Chemmy Alcott let Great Britain know just how happy she is with her final Olympic downhill run, “19th is a gold for me. Anyone who has followed what I've been through will understand that.” To get a top 20 place at Sochi after recovering from two leg breaks, the last one only six months ago, has taken nothing less than pure resolve from Chemmy. 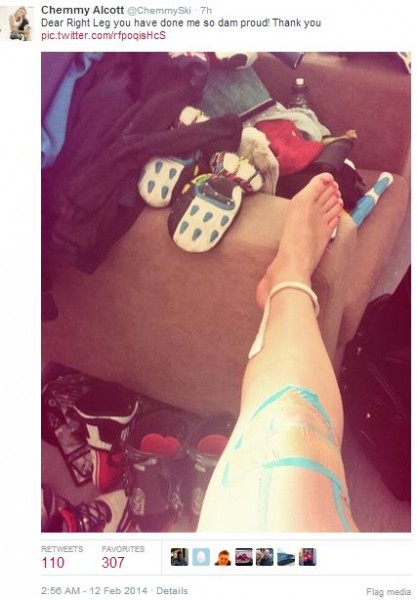 With a positive attitude that is infectious, she has no doubt inspired other British skiers that four Olympics isn’t only hard work, it’s fun too! 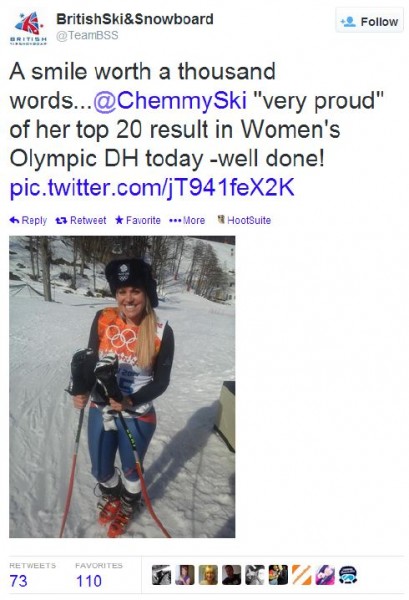 The race was won by Slovenia's Tina Maze and Switzerland's Dominique Gisin who both earned the gold in a dead heat, a first for Olympic alpine skiing. Chemmy's time of 1.43.43 minutes was two seconds off the pace.

We spent time with Chemmy at the end of November last year, and she went through the exercises she does to strengthen her leg. She didn't let on while the camera was rolling, but between takes there was plenty of caution taken as she showed us her lunges. Her leg was causing her pain, but she focused on filming the entire day, sharing her training schedule without any complaint at all.

We've seen how great Britain’s can be, with Jenny Jones winning a first ever British Olympic Snowboard medal, a bronze for the Ladies Snowboard Slopestyle.

Chemmy had called this. During our filming session with her late last year, we asked her about which British athletes she thought are medals contenders.

“I think that going into Sochi, it’s the strongest winter team I've ever been part of. There’s not just one person who’s going to bring home gold, there’s at least three. My top three to watch out for are Elise Christie, Shelley Rudman, James Woods and Jenny Jones. Oh wait that’s four!”

So keep your eyes glued to BBC all day on the 13th February for Shelley Rudman competing in skeleton and James Woods competing in Ski Slopestyle. It'll be a truly Olympic day for Britain as Elise Christie is competing on the 13th as well, in the 500m speed skating. This is partly a warmup for her as her stronger events are the 1500m on the 15th and 1000m on the 21st February. 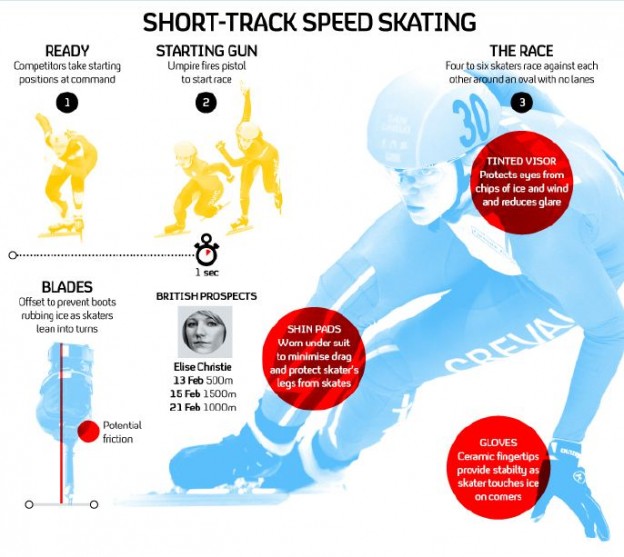 During our interview with Chemmy we also got to ask her about her passion for skiing, and she inspired us with a story of fighter. She's a woman who has proved how much inner fight she has, a fight she thinks everybody has. We believe!

“My dream when I was a little girl, five years old, I had this dream that I would win an Olympic gold medal and it was so vivid. I remember I was standing on the podium and I could hear the national anthem playing and that’s always been my dream. I've been to three Olympics, I've come 11th twice, and I've been to Sochi, which will be my last games, knowing that I could’ve always done better than 11th but the journey I've had over the last four years has been so far from ideal that I’ve kind of made peace with the fact that maybe it isn't my destiny to win a gold medal, that maybe it’s to show people that against all odds and against all adversity you just have to keep fighting. And that’s what I’m doing. That despite having a broken leg 120 days out from the biggest day of my life, I will be there. People don’t know how much inner fight they have, they think, oh I can’t do it now. But you can.”

← Top spots for some winter sun