When it comes to seeking healthcare abroad, Virgos and Capricorns make up 20% of all medical claims, and watch out if you’re flying with a Cancerian or a Piscean – these water signs made the most claims for travel delays.

Those energetic yet temperamental Cancerians topped the bill, making over 30% more claims for delays than Virgo travellers, and 21% more than the overall average.

It would seem that Pisceans need to keep a closer eye on their belongings – they make the most claims for lost passports, and are over 65% more likely to make a claim than Cancerians. Gemini holidaymakers claim the least for loss of personal money, with the average Gemini claiming for 60% less than Sagittarians.

Those calm and clear-headed Capricorns are the ultimate holiday companion – they’re known to be efficient, organised and good at making sure things happen. Could this be why Capricorns made the fewest claims for cancellation of a holiday? Taurians, on the other hand, are known for making bullish decisions, and are the most likely to cancel their trip.

Greg Lawson, Head of Retail at Columbus Direct, commented: “It’s always interesting to investigate trends but I didn’t expect to find a correlation between signs of the zodiac and reasons for making a travel insurance claim.

“While many make light of astrology and its influences on daily life, Columbus Direct recommends that everyone checks they have adequate travel insurance in place, whichever sign of the zodiac they were born under, to ensure they are covered whatever their travel destiny holds." 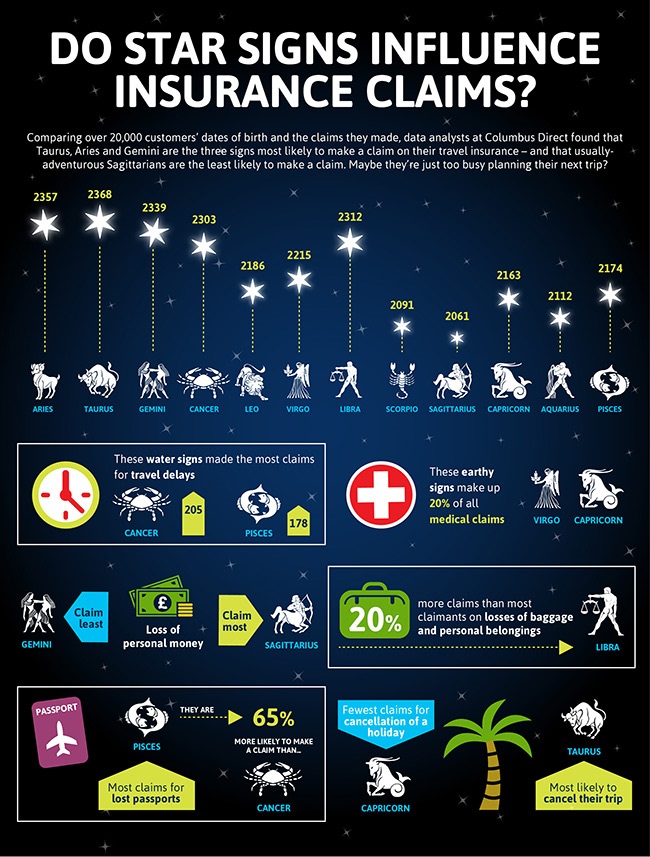 The worst things about returning home from holiday →