The world's most terrifying airport landings 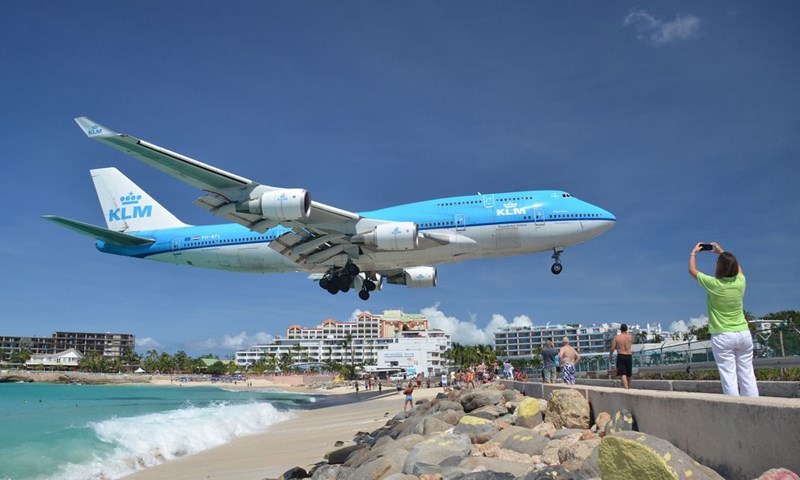 OK, OK - we'll admit that the title of this article is a little misleading.

Air travel is safe - thrilling, high-powered and often awe-inspiring - but safe. However, that doesn't mean that us mere mortals can't marvel at some of the 'terrifying' aspects of air travel, which most pilots probably find predictably boring at best, and slightly problematic at worst.

Here are a selection of landings which had us clinging to our seats, muttering reverential oohs and aahs.

If you're not a big fan of landings, steel yourself. Madeira's airport is known among pilots as something of a challenge due to its proximity to mountains and the sea, which can increase the risk of extreme turbulence and poor weather conditions. The video below shows a plane attempting to land but aborting at the last minute due to terrifyingly strong crosswinds.

Pilots descending towards the runway at Princess Juliana are approaching over water - this necessitates regular instrument checks to ensure they're on target, as the sea can disorientate them. If you're after a plane-based thrill, head to Maho Beach, where you can stand and goggle as planes come in to land just metres from your head. Take-offs aren't any less jarring; immediately after leaving the ground, aircraft must make a sharp u-turn to the right to avoid the mountains at the end of the runway. Pre-flight glass of wine, anyone?

Another great one for nervous fliers - as this runway juts out into the Med, pilots must slam on the brakes as soon as they land, or they risk skidding off the end of the runway and ending up in the sea. Better get that life jacket on now. As if that wasn't enough, there is a busy motorway across the runway, allowing cars to travel between Spanish city La Linea de la Concepcion and Gibraltar.

Kai Tak was known for its scary approach to the lucky-sounding runway 13. Pilots were required to fly in low over Hong Kong's residential areas, and when they hit 1,000 feet, they had to execute a tough, technically-demanding turn to the right to line up with the runway. This would have been bad enough by itself, but they also had crosswinds and surrounding mountains to deal with.

The airport was finally shut in 1998 after a number of fatal crashes. It is now the new Kai Tak Cruise Terminal, for cruise liners.

This airport's short runway, surrounding hilly landscape and notorious crosswinds that can make for a terrifyingly turbulent landing. The video below may shock you, but it's a typically tricky landing, which is the likely reason why no-one applauded the pilots. Look closely, and you can even see the plane angled over as it lands on the left set of wheels before touching down on the right set.

As well as having a delightfully-bumpy runway, which is the last thing any pilot needs, Ecuador's high-altitude airport is in the centre of its densely-populated capital. Landing is no picnic due to mountains surrounding the area, a valley prone to fog, and, er, active volcanoes.

Only certified pilots are allowed to land at this high-altitude airstrip in the French Alps. The runway is short, sleep and slopes upwards, so planes can slow down easily once they touch down. To make matters worse, the approach to the runway involves deep valleys and mountainous weather conditions, which can make landings a little jittery for all concerned.

The History Channel programme Most Extreme Airports ranks Toncontin International as the second most dangerous airport in the world. Large aircraft have been banned from landing here since an incident in 2008 when an Airbus A320-233 overshot the runway on landing; the aircraft plunged down an embankment and came to rest on a road. Five people died in the accident.

← South Africa: New rules in place for travelling with children

Insurance fraudster ordered to pay back thousands of pounds →