6 of the Best Places to Celebrate Holi – Festival of Colours 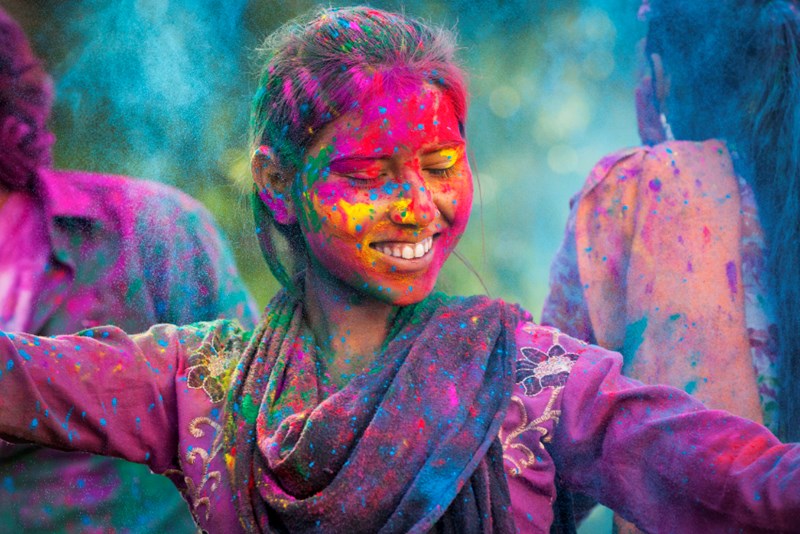 What’s a festival without getting a little messy? India’s Holi celebrations do it in style. You’ve probably seen the pictures – revellers covered head to toe in vivid coloured powders, the air clouded in a pastel explosion.

Want in on the action? Well, if you’re thinking of getting away this Spring, take a look at our run-down of our favourite places to celebrate Holi – the Festival of Colours – below.

Holi celebrates the end of winter and the heralding of good over evil. It's a moveable feast which takes place the day after the full moon during March. Holi 2019 will take place on 21st March.

It's traditionally a religious festival. But the infectious fun of the colourful play-fights have been adopted all over the world. You might know someone who's taken part in a colour run – where charity runners are pelted with coloured powder. But where does this tradition come from? 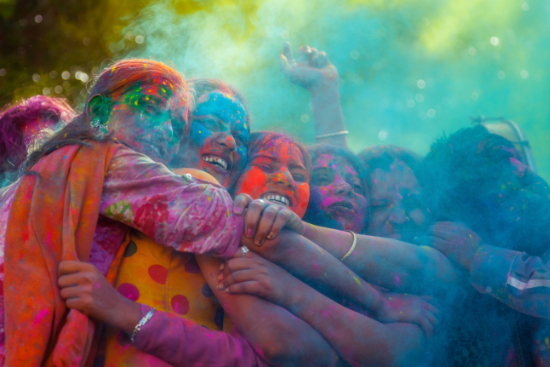 The History of Holi

Holi’s origins are interwoven with the coming of spring, good harvest and fertility of the land. But in a similar way to Easter’s pagan origins, it has been spliced with religious stories and symbolism. In this case, from Hinduism.

Two stories are linked to Holi. The first is pretty romantic stuff, and explains why Holi is the exuberant colourful party it is today.

It celebrates the love story of Krishna and Radha. Krishna is traditionally depicted as having blue skin. He told his mother he was unhappy that his difference would come between him and fair-skinned Radha. His mother told him not to wish for fair skin but to playfully smear Radha with paint instead. Which he did and Radha fell in love with him.

The second story symbolises good triumphing over evil and tells the legend of Holika and Prahlad.

Prince Prahlad's rather was the demon king Hiranyakashyap. He was a monarch on one almighty power trip - he wanted everyone to worship him. The price included. But Prahlad could see that his father was corrupt and chose to worship Lord Vishnu instead.

Enter his aunt - who held an amazing power. She was immune to fire. But, she was also league with her brother the king. She tricked Prahlad into sitting on her lap in a bonfire – meaning to destroy him.

However, the forces of good overcame all. Prahlad emerged from the flames unharmed, while his aunt succumbed to the flames. Bonfires are lit to symbolise these flames on the eve of Holi – which is called Holika Dahan, or Chhoti Holi.

The evening before Holi, bonfires are lit to ward off evil spirits and keep family and children in good health. It’s traditionally lit at sunset – or Pradosh Kaal - and no earlier, to avoid bringing misfortune in life.

The Festival of Colours

The spirit of Holi is to forget your differences and shrug off inhibitions. It's about having fun together. Revellers pelt each other with rainbow-hued gulal powder, throw water balloons and tote water pistols.

Dry colours are called ‘gulal’, and mixed with water they are ‘rang’. Either way, they may stain so make sure you wear old clothes!

Northern India is the home of Holi, but other destinations around the world have adopted it in all its colourful glory.  Grab some inspiration for your next trip below – whether it’s a package tour of India, backpacking on a round the world ticket or a weekend break in the UK:

Part of the historic Braj region Mathura and Vrindavan have a special connection to the festival – as the birthplace and childhood home or Krishna.

The nearby village of Barsana is reputed to be the place where Krishna flirtatiously smudged Radha with the original Holi colours, and is famous for an event called Lathmar Holi – where women chase and beat men with sticks.

We’re assured it’s all in good jest, the men get to retaliate by throwing colours at the women, or else try to avoid attack by wearing a cunning disguise in women’s clothing and make-up.  After the play-fighting, the crowd all get stuck in and you’ll all get a chance to play Holi!

While you’re in the region, make sure you visit to the Banke Bihari Temple in Vrindavan, where vibrant holi colours are translated into a wall festooned with thousands of flowers.

Venturing into the streets during the busiest hours of Holi can be a risky business for travellers – so a great way to take in the festival atmosphere is by checking in advance what our hotel is offering.

If you’re looking for a package tour of India, then the ‘Pink City’ of Jaipur has all bases covered for Holi celebrations this Spring. Rajasthan Tourism in particular go all out with making sure tourists join in the fun – organising a huge Holi event on the lawns of the Khasa Kothi Hotel with performance artists and musicians.

With Jaipur as a base, you can also take in Eleholi Fest near Amber Fort – a colourful celebration at an elephant sanctuary where these friendly giants are adorned with vibrant organic colours for Holi and you can take part in colour play, elephant feeding, photography and games, as well as fill your belly with delicious food. We know that elephant tourism can be a controversial activity, but Eleday are well known for their responsible treatment of their pachyderm friends, and although they offer rides, these pay towards funding for the sanctuary.

Artsy, cool Melbourne hosts Australia’s biggest Holi festival. With an inclusive attitude, the emphasis is on the celebration of the human spirit. The Festival of Colours is hosted by a local Hare Krisha group at Barwan Park Mansion – a Victorian stately home that’s part of Australia’s National Trust.

You can join in with colourful play with gulal powders, experience live performances, meet likeminded souls and get some festival decoration on your body - in the form of face paint and henna tattoos.  It’s a safe place for kids to experience Holi too – and is all geared up for younger family members, with inflatables, kids games and animals to meet!

A festival by the people, for the people - Basanta Utsav Folk Festival is organised by residents of the region of Purulia to provide their village economy with a rich influx of visitors for Holi. A visit helps ensure they can sustain their village life.  You’ll experience the different forms of folk dance of West Bengal and music played by wandering musicians. And in true festival style, camping accommodation is available.

If you’re planning a, exotic holiday or honeymoon in Mauritius, you’re in luck if it coincides with Holi.  Revellers take to the streets for this official public holiday, and a colour-drenching can be expected wherever you go - with water-bombs and improvised bamboo water pistols adding to the fun.

The festival has its roots in the Hindu population of Mauritius – who make up about half of its residents – but the festivities are enjoyed by all.  There’s dancing and music, and people exchange sweets and other treats. It’s good-natured exuberance and one of the most fun places to celebrate outside India.

There’s no shortage of Holi celebrations here in the UK. Take a city break  in London to experience what’s officially become the biggest Holi celebration in Europe - The Holi Festival of Colours in London. More of a festival in the ‘dancing in a field’ sense, it sees a euphoric crowd enjoy music performances and a flavour of Holi with gulal powder fun.

If you’re making it a family trip, try The Magic of India Colour Party in Swiss Cottage to get the kids messy, soak up the vibes and foodie treats with some mouth-watering Indian street food.  Add in a trip round the sights and it’s a weekend away the kids will be reminiscing about for years.

Travel to the Ends of the Earth for National Parks week →