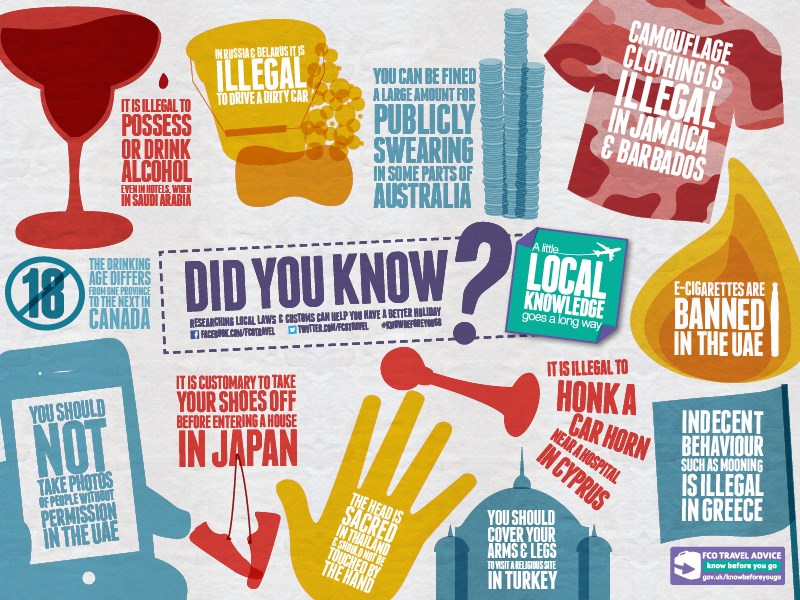 FCO encourages people to be better prepared by researching the local laws and customs of their holiday destination before travel.

Every year British nationals risk getting caught out by local laws and customs when travelling overseas.  From driving a dirty car in Russia, to wearing camouflage clothing in Barbados, travellers could end up with a hefty fine or may even be arrested if they are caught unaware.

According to new research issued by the Foreign & Commonwealth Office, while 70% of people believe that researching local laws and customs would make their holiday more enjoyable, less than half would actually make this part of their preparations when visiting somewhere new.  For those visiting places they had been to before, just 40% said they would do this research, despite the fact that local legislation and even local customs can change at any time.

In 2014, the following changes in local law were introduced:

"It’s easy to throw caution to the wind when on holiday but it’s important to be aware of the local laws and customs before you set off. We want people to enjoy their holidays so we encourage them to be prepared. Laws and customs vary widely from country to country and visitors should respect them to avoid causing offence or even being arrested. Spending five minutes reading our travel advice may save travellers a lot of time in the long run."

Just last year, two British tourists were arrested for swimming in the Emperor’s moat at the Imperial Palace in Tokyo.  This might sound like a bit of harmless fun, but their actions were the equivalent of attempting to break into Buckingham Palace – and being arrested in Japan for even a minor offence can mean remaining in custody for 23 days while awaiting an investigation.

Jaywalking in the USA, the Czech Republic and Poland; entering churches or mosques with arms or legs uncovered in Italy or Turkey;  and leaving the beach still in swimwear in Mallorca and Barcelona; are just a few examples of common laws and customs broken by foreigners who didn’t research their destination before going on holiday.

How many cigarettes can you legally bring into Thailand?  What equipment should you carry in your car when driving in France?  What is appropriate attire to wear in public in Saudi Arabia?  Wherever you are going, the FCO’s travel advice pages have a laws and customs section for each destination and are a great place to begin your research.  Also take a look at our infographic for some interesting examples from around the globe.

"When heading off to other countries it’s easy to forget that the things we take for granted in the UK may not be allowed by the local laws and customs of the country we are visiting. The FCO travel advice pages should be something we all check before we go. The local laws do vary so, even if you are going to well-travelled countries in Europe, it’s worth taking a look at the FCO advice. A few minutes on their website could make sure that you get that relaxed, trouble-free holiday you’ve been looking forward to.

Travel insurance wouldn’t cover costs incurred after breaking any of the local laws, however odd they seem, so a bit of advance knowledge of the country you are visiting could save you cash as well as time."

If you have any enquiries for FCO consular staff before you go or while abroad you can use the FCO’s Twitter service @FCOtravel. Questions are answered 9am – 6pm BST, Monday – Friday and FCO staff aim to respond within 30 minutes. This service adds to the ways that British people travelling or living overseas can already get in touch with the FCO: by emailing the travel advice team or contacting local consular staff.

You can also keep up-to-date with the latest FCO travel advice by signing up to the FCO’s Facebook and Twitter feeds: www.facebook.com/fcotravel or twitter.com/fcotravel.

← Not too late to book a family summer holiday