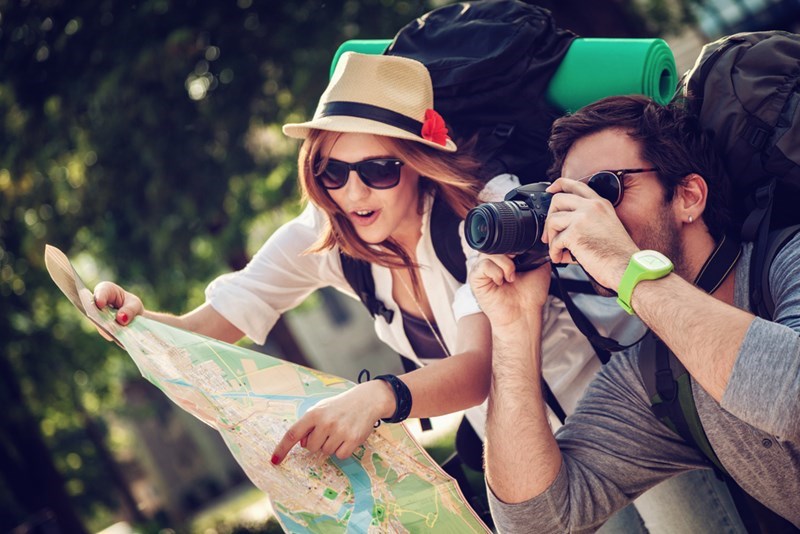 Hipsters, whether you like it or not, are here to stay. And sometimes they'll even squander some of their hard-earned start-up cash on an easyJet ticket and leave the UK, much like the rest of us - although we'll admit that's pretty mainstream.

If you want to spread your personal brand of cool around the world and raise eyebrows/blood pressures wherever you go, travel like a hipster. It's frighteningly easy, and here's how it's done.

Don't eat anything without making a fuss. If something is offered to you, suspiciously check the label to see if it's gluten free, or fat free, or made with spelt, or handmade by morose children in Arnos Grove. Ask for vegetarian menus, peruse them silently, then order a very rare steak in restaurants. Tell everyone you're a vegan and that you care about the environment while smoking as much as you can. #LiveAuthentic

Constantly whine about coffee. If it's not brewed in front of you using fresh beans, wince, and start asking pertinent questions. However, if it's made for you by a local with dirty hands and a weary expression, drink as much as you can, take pictures of you drinking coffee with real-life actual foreigners and use as many hashtags as possible.

Utilise a hip flask. Fill it with water, and swig from it nonchalantly as and when you feel like it. People will assume you're a total alcoholic, but that will only add to your air of mystery.

Don't join in with any group activities. Fine, you'll go on the trip up the mountain with the tour guide and ten other people, but only because you've heard there's a nice spot to, you know, find yourself? Bring a rug to sit on and explain that 'the agency's been working me really hard' to anyone who'll listen (just tell everyone). Once you're at your destination, wander off without saying goodbye with your new Spotify playlist ('1992') blaring. Ignore the guide when they tell you what time you all meet for lunch and the coach departs. You live on your own time now.

Make sure everyone knows about the obscure bands you like. It's cool, you don't even have to know any of their songs - just liking them is enough. Just how they look, their vibe - even though you've seen their picture in NME, like, once, and that was at your friend's boyfriend's party and you're not even sure if it's the same band - oh look, Lana Del Ray's back on Instagram.

Ignore other backpackers. Nobody's travelled like you have. Just remember that. Never change.

Constantly drink water on the plane. Constantly slide over other people to use the toilet. If anyone complains, remind them that flying dehydrates you and your spiritual healer said that you needed eight litres of water a day in order to flush out your chakras. Actually, that might have been your doctor. Do it anyway. Don't forget to change your mind about your meal just before dinner is served, request a vegetarian meal (with NO BREAD ROLL) then don't eat any of it. Ask for more water.

Make a fuss. If there's a man at your resort offering camel rides on the beach, set up a daily protest by standing next to him with a placard saying #UNFAIR, because you care about animals. Buy a genuine snakeskin bag to celebrate once you've made him feel uncomfortable enough to stop offering camel rides and/or move to a beach further away.

Stay in hostels and complain that you're poor. Your dad, who you totally hate, pops money into your account every day but that's just so PATHETIC. Complain that you're broke, stay in awful hostels, and repeatedly say that you can't do anything while buying American Apparel leggings (even though Eva Wiseman says they're no longer cool, which, like, is fine, whatever) on your iPhone and mulling over restarting your blog about people you really don't like.

We compiled a list of the funniest-ever TripAdvisor reviews. They're good. Trust us.

Staycations are rubbish. Here's the proof.

← Is there a way of truly beating jet lag?

How to beat the ten most popular travel scams →