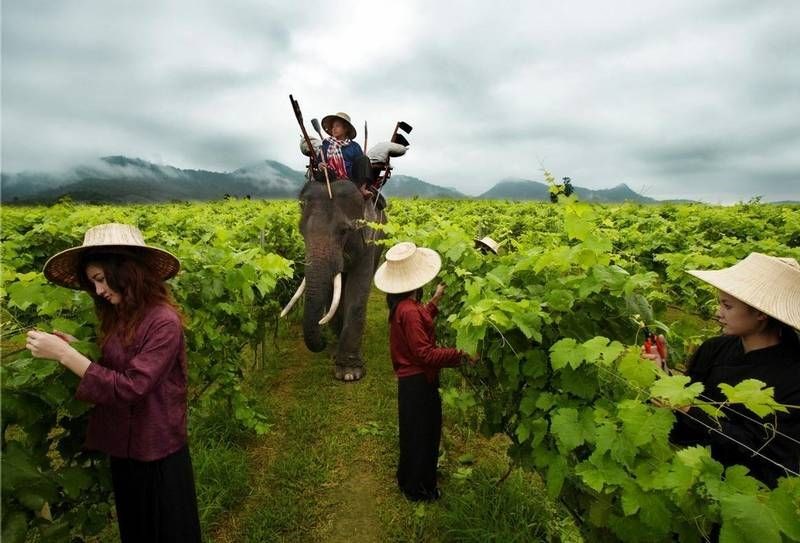 Think wine and, most of us anyway, immediately think of the major wine producing countries such as France, Spain and Italy. Those who think of themselves as modern connoisseurs may think Australia, America and Chile. The fact is that there are very few countries who don't produce wine now, and they have been clever to incorporate so called wine tourism into their various initiatives to attract more visitors. Here we look at some of the more unusual wine making regions you may not have come across.

Chile and Argentina are the best known South American countries for producing wine, but aficionados have also discovered the wines coming out of Brazil. This wonderful country, best known for football and carnival, boasts a wine industry that is finally appearing on many people's radars. There has been a huge increase in British tourists booking trips to Brazil, and it is not only due to their beautiful beaches and wonderful climate.

Copacabana beach, Sugarloaf Mountain, the statue of Christ the Redeemer, Rio de Janeiro, Iguaza Falls, Tijuca Forest, the list of tourist attractions in Brazil seems nearly infanate. It is, however, well worth fitting some wine tours into your albeit packed itinerary. Deep in the south of country is the outstanding Rio Grande do Sul wine region, and there are tours and tastings easily available to many wineries in this vast area of vineyards.

The wine industry in Thailand proves that heat and humidity are no longer factors that deem a country unsuitable for wine production. The grapes here are grown in what are effectively 'floating vineyards', where canals of water run in between the vines to keep them alive when the heat is at it's most extreme. The largest producer of wine in Thailand is the Siam Winery, which produces more than 300,000 bottles a year of the Monsoon label.

There is a waiting list for jobs here, hardly surprising that staff are regularly sent to Europe on training jaunts. The problem is that due to the high taxes, widespread wine drinking hasn't reached the general public in Thailand but they do have a burgeoning export market. If you take a trip to Thailand make sure to order a bottle of local red, white or rose, the perfect accompaniments for your green curry or chilli stir fry.

This country, unfortunately, is better known for bullet riddled buildings than fine wines, but the biblical like landscape that exists here has been producing a selection of exciting wines for quite a few years now. The most famous winery in the country is Château Musar and is fast becoming known in other parts of the world with those wine enthusiasts who seek out new countries and wines to try.

The Château  Musar 2003 is absolutely delicious with its raspberry and peat scent, and can now be found in several British supermarkets. If the theory is true that the passion, history and personality of a country seep into their wines, then the offerings from the Lebanon must be an exotic and devil-may-care addition to your dining table.

Eastern Europe has never been well known for quality wines but that is changing, and fast. The country of Romania has a fascination about it that many western tourists are choosing to sample. Magical, mysterious and with a healthy dose of Gothic horror thanks to its association with the Prince of Darkness, Dracula, Romania has much to offer the tourist. Being one of the oldest wine producers in the world, its wine tourism is also booming.

The Murfatlar vineyard, which is one of the best in Romania is a fine representative of the Dobrogea wine region. You can visit the winery, the vineyards the museum and the fantastic wine cellar. Professional tours and tastings can be arranged, and guides speak both English and Romanian.

You can probably imagine a fruity, sparkling beverage made from pineapples coming out of the 50th US state, but you just don't associate grapes with Hawaii. Viticulture is probably the most surprising fact about Hawaii since we found out people ski there. Hawaii actually boasts 2 wineries; one of Oahu and the other on Maui. They both mainly focus on the Symphony Grape, which is a cross between the Grenache Gris and the Muscat of Alexandria.

The Volcano winery has described the bouquet of Symphony wine as having the essence of apricot, lychee and peach. There is a very exciting development this year when their first batch of Pinot Noir 2013 will be released from the oak.

Another Eastern European country that is starting to really make its mark on the wine market is Hungary. Altogether, there are 22 different wine regions in Hungary, and many of them are very close to the main tourist areas so it is easy to fit in a few visits, and a bit of sampling when you are here. One of the most popular cities for short breaks is the capital Budapest, and within a short distance there are some excellent wineries well worth a visit.

When you are exploring Budapest make sure you call into the House of Hungarian Wines in Buda Castle. Here you can sample wines from almost every wine region in Budapest, and there are over 500 bottles of wine here, both on display and for sale. Both Palinka and wine tastings are available as well as snacks, local cheese plates and cellar tours. In short, there is much fun to be had for the wine lover on Castle Hill.

Anyone who actually knows anything about Cape Verde, which is probably very few of us, will know this archipelago off North Africa's west coast is renowned for its lunar like landscape. This is the closest you will get to growing grapes on the moon. The island of Fogo boasts an active volcano and the distinctly grey landscape is only broken by a tiny village with 1000 occupants but no electricity or running water.

Inside the crater there are 2 cooperatives hard at work. Between them they manage to produce 160,000 bottles-a boutique amount- a year of whites and roses which are of export quality. They produce these from the Moscatel grape as well as a fruity red that comes from a Portuguese grape. The hot dry days, volcanic soil and cool but humid nights are perfect for these grapes, even though the landscape looks like the last thing it could sustain would be grape vines.

Both Germany and Latvia lay claim to having the most northerly vineyard in the world, each just a shade over the magic figure of 50-52ºN . This is the highest latitude before grape growing is deemed to be not viable. The distinction, however, has to go to Sweden, whose winery near Flen, which is 100km to the west of Stockholm is located at a very lofty 59º N.

As you would expect from this extremity, the hardy new Cultivars Solaris grape is used for the white and Rondo for the reds.  There is a bit of a problem as far as exports go, however, and as the commercial production is restricted to the 3 or 4 large wineries in the south, these northern producers have to wait for a change in the law. Which means that currently they can only serve the wines they make through their own restaurants, or battle to get them onto the shelves of the state controlled chains of liquor stores.

These are just a few of the many somewhat unusual countries that have a burgeoning wine industry. It is good to sample wines from new regions and see how the different climates can offer different results from grapes we assume we know so well. Why stick to tried and tested when there are so many new tastes out there to titillate our taste buds and make us appreciate the real beauty of this most traditional of drinks.