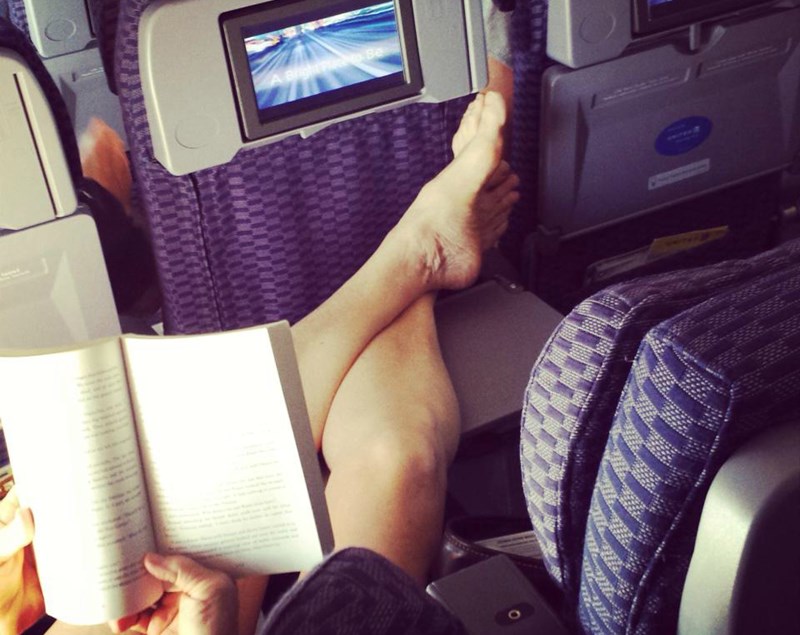 The next time that you're on a flight and you're tempted to kick off your shoes and relax, you'd better think again.

Ever since January 2013, former flight attendant Shawn Kathleen has been uploading pictures of outrageous passenger behaviour to her Facebook page, Passenger Shaming.

People all over the world that have been incensed by impolite behaviour on planes have submitted their pictures to Passenger Shaming, and it makes for a rather interesting read.

The in-flight bugbear most often photographed is people putting their feet up; across the top of the seat in front, the sides of the emergency door and the panel at the front of the plane seem to the most popular locations.

However, the bad behaviour doesn't stop there. The Facebook page shows people wrapping themselves in newspaper and lying across three seats to have a nap, used sanitary products stuffed in seat pockets and pieces of chewing gum stuck inside safety manuals.

One man has been snapped doing push-ups in the rear of the plane (you know, the area where the stewards have to work) and people filing their nails and picking off false nails have also been documented.

Oh, and there's always time for romance; used condoms have been found on the floor after planes have landed, and quite a few passengers who thought a flight was a good time for a smooch can be seen on Passenger Shaming.

Our least favourite? The man 'relaxing' with his top off as he tries to grab 50 winks. Urgh.

With that in mind, make sure that you're on your best behaviour the next time you fly - we can guarantee there'll be someone with a phone camera to snap your misdemeanours if you're tempted to let your standards slip...

Click here to find out how to avoid being 'that' passenger

How the summer holidays can wreck your home →