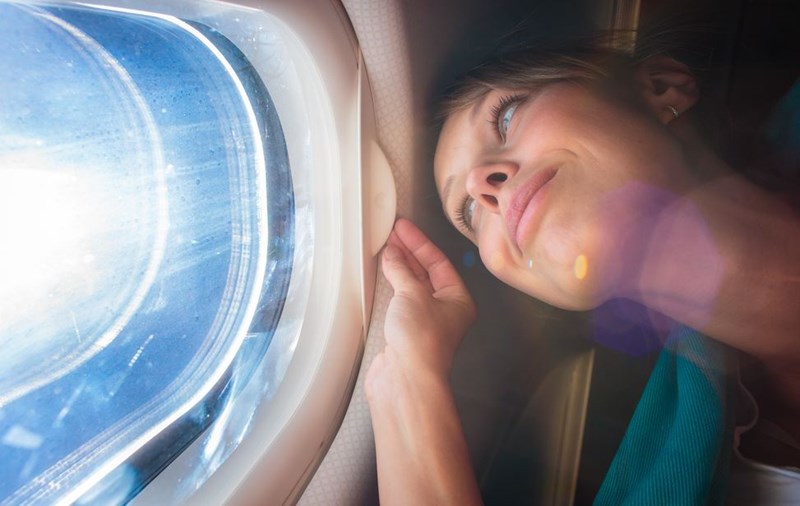 Until someone invents the teleporter, we're afraid that long-haul flying is around to stay.

It's cramped, it's miserable, and it's not known for its fantastic food - but there are ways to ensure you arrive at your destination looking slightly better than everyone else.

1) Watch your drinking. Alcohol acts as a diuretic and it dehydrates you - and guess what breathing recycled air does? That's right, it takes the moisture out of your system. It's recommended that you don't drink for at least three days prior to flying, and it goes without saying that you should avoid the obligatory pre-flight pintm.

2) Avoid massive portions. The day before you fly, stick to smaller servings and you'll avoid that dreaded 'I feel like I've swallowed a football' feeling. Nothing is guaranteed to make flying more uncomfortable; well, part from a hangover. See above.

3) Dress it down. We're not saying wear a tracksuit (although you can, that's fine, there's not a law against it), but wear clothes that let you move freely, and don't restrict you. That means no tight belts, pop socks that cut your circulation off at the knee or anything that'll stop your blood flowing around your body easily. By doing this, you'll reduce the possibility of a blood clot, which can be fatal if it reaches your heart, lungs or brain.

4) Get moving. It's beneficial to get as much exercise as you can when you're sat down for long periods - a sluggish blood flow and lack of movement can result in DVT (deep vein thrombosis), which is a clot in one of the body's deep veins. As mentioned before, it can be fatal.

5) Stay hydrated. Drinking lots of water will mean more trips to the loo but you'll feel so much better when you land. Try and drink one small bottle every 90 minutes. Not only will the water help thin your blood, but it'll also ensure your skin doesn't dry out due to a lack of moisture.

6) Bring your own snacks. Plane food isn't the tastiest culinary offering on the planet but that doesn't matter - bring your own food. Hummus salad sandwiches, a piece of fruit and a packet of salted cashews is a thing of beauty when everyone else is suspiciously poking their 'risotto'.

7) Bring decent earplugs and an eye mask. If you want to sleep, and we recommend that you at least give it a go, these are essential. Even when people are trying to sleep on a plane, there's still plenty of noise - don't bank on everyone suddenly deciding they're tired at 11pm and falling asleep without a whisper.

8) Don't curl yourself up in an attempt to get comfy. Before you try to get some sleep, make sure you're as spread out as space allows. That means no crossing your legs, no tucking your hands behind your knees and no other vague contortions that take your fancy. Just let it all hang out, as undignified as you might think this looks.

9) Take an aspirin and some vitamins. If you've got a stomach complaint, check with your GP before you take any aspirin, but it's a good idea to take a tablet before you fly to thin your blood (yet another clot-busting tip for you there). The vitamins will just help your immune system to keep any bugs at bay.

10) Don't stress. If you're a fearful flier, there are things you can do to bring those cortisol levels down - and remember that boozing is a very, very bad idea. Pop some relaxing music on an in-flight playlist, make sure you have some homeopathic remedies to hand, and before you fly, try and master the basics of breath meditation.

Should families be seated separately on flights? Two parents reveal different sides of this debate...

Do you know what your insurance actually covers? Click here to find out.